MAMMA Mia!—Canberrans and Queanbeyanites don’t seem to be able to get enough of the cult musical of the same name, and Free Rain Theatre is putting that notion to the test with a new production coming up at The Q.

The show, famed for the music by Björn Ulvaeus and Benny Andersson of ABBA fame and the film starring Meryl Streep, is set on a Greek island, where bride-to-be Sophie Sheridan reveals to her bridesmaids that she has secretly invited three men, hoping that one of them might be her father. 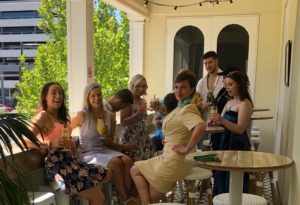 An Australian professional production of “Mamma Mia” enjoyed a sell-out season at the Canberra Theatre in late 2017.

According to the director Jarrad West, under the rights agreement this show had to be done by an amateur cast, so Free Rain will not be sourcing professionals from Sydney.

“I loved that it had to be an amateur cast,” West said this morning at the season announcement.

“The auditions were a dream and the talent here in Canberra blew me out of the water.”

He’s assembled a mixed cast, headed up by veterans like Louiza Blomfeld playing Donna, alongside Tracy Noble as Rosie and Helen McFarlane as Tanya.

“It gives young people an opportunity to play good supporting main roles,” West said, adding that this would be “12 x 12 x 12″ production, meaning a cast of 12 principals, a male chorus of 12 and a female chorus of 12.