MORE than two months after a group of Canberra veterans, in a “CityNews” article, called for donations of new and used guitars to give to disadvantaged children, ex-Navy man Colin Greef says they’ve now got a great collection but they’re looking for more.

“We’ve got a good collection now of more than 12 guitars in excellent condition, with a couple of brand-new ones,” says Colin, who was on the “CityNews” cover on November 7.

“But we can’t get enough. We want it to be a community project and donate to people from all walks of life.

“It’s like a business now. We’re really getting into it and just love it.” 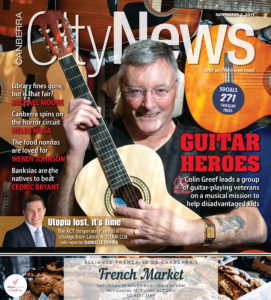 Two of the donated guitars have gone to two young boys whose dad, and ex-army and federal police officer, died from a brain tumour.

Colin says one of the guitars, donated from a lady in Weetangera, belonged to her brother who was also ex-police, but in Victoria, and who also died from a brain tumour.

“She was thrilled that her brother’s guitar had gone to one of the young boys whose father was in the federal police force,” Colin says.

“When we presented the boys, Chris and Jack, with the guitars it was so emotional, they were just absolutely thrilled.”

But Colin says they’re not just donating the guitars to people who are related to veterans.

From the donation, Colin says they’ve given out four to the Police Citizens Youth Club in Erindale, two guitars to the youth charity Kulture Break, which only had bongo drums, and two guitars to an African choir of orphans that was in Canberra playing at a local church.

“We gave them a couple of guitars. They were so happy, they said: ‘Are you serious, you’re going to give us a guitar’,” he says.

“It’s terrific to see the faces of the people we give guitars to.”

“We’re going to give them two guitars and go there every two weeks and teach them how to play,” he says.

“[And] early next year we’re looking to go around to small schools that are doing it tough to give out a guitar or two.”