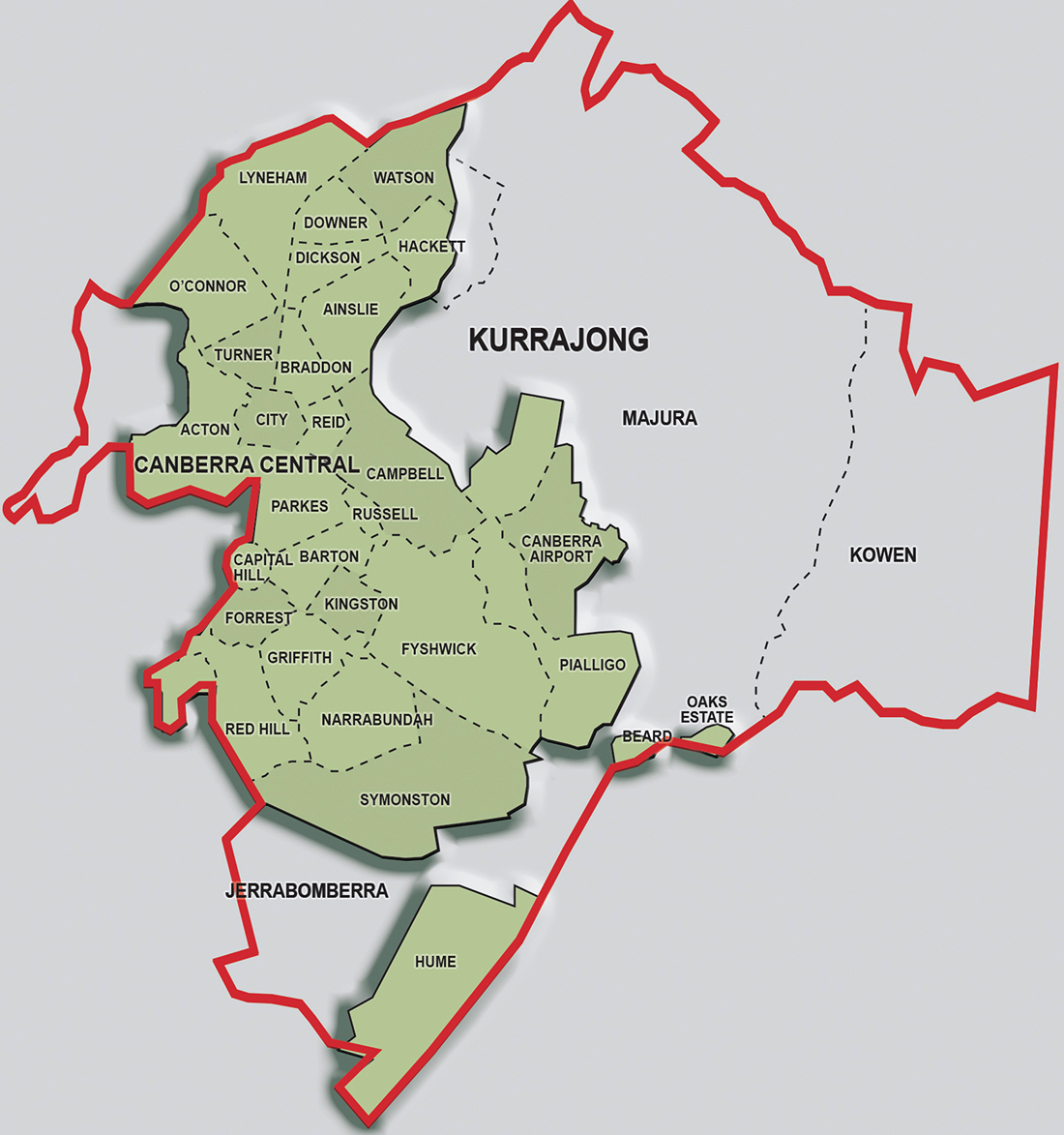 With 25 seats up for grabs in the October 17 ACT election, there is one seat in each of the five electorates of five members that will effectively decide the election – the fifth seat. In a series of articles political reporter BELINDA STRAHORN will analyse the fate of each of the “fifth seats”. This week she looks at Kurrajong.

ONE wouldn’t be looking to Canberra’s central electorate of Kurrajong to cause an upset on election night given its largely stable voting pattern.

From the mansions of Forrest to the less celebrated suburb of Oaks Estate, no other electorate in Canberra embodies greater diversity.

Voters here are either rusted on to Labor or Liberal, however there’s also strong support for the Greens.

In the absence of a major campaign setback – between now and October 17 – one could comfortably assume the same voting pattern of two Labor, two Liberals and one Green will be followed.

Who’s a hot bet of being returned?

Barr, ACT politics’ most influential man by virtue of the position he holds, and Stephen-Smith, who’s performed well during COVID-19, are odds-on to secure seats for the Labor Party in October’s ballot.

At the last election, between 22 and 29 per cent of voters gave their first preference to the Greens in Dickson, Downer, Watson, Lyneham, Turner and Ainslie. In most of those booths, the Greens’ vote was stronger than the 2012 election.

In 2016, Kurrajong delivered more than a full quota to the Greens (1.1), Labor achieved 2.3 quotas and the Liberal Party 1.9. In case you’ve passed out from election fatigue already, the ACT operates under the Hare Clark voting system, where parties are required to achieve a quota of votes in order for its candidates to be elected.

The Liberals’ plan in Kurrajong

Liberals’ leader Alistair Coe will be looking to Kurrajong to keep his prospects of forming government on track. Incumbents Candice Burch – elected on a countback to replace the late Steve Doszpot in 2017 – and Elizabeth Lee, will both be hoping to retain their positions.

The Liberals out-polled Labor in the suburbs of Red Hill, Yarralumla and Griffith in the last territory election. Deakin, where 57.7 per cent of voters gave the Liberals their first preference, was the party’s best booth. But the party received less than 20 per cent of the first-preference vote in Downer, Dickson, Ainslie, Turner and Lyneham.

The other inner-north booths recorded just a 20 per cent first-preference vote for the Liberals. Two of the Liberals’ strongest-polling booths in Kurrajong – Yarralumla and Deakin – were moved in a redistribution to the electorate of Murrumbidgee.

Here’s what the experts think

Political analysts are hard pressed to disagree with the current voting pattern of two Liberals, two Labor and one Green in Kurrajong.

Former chief minister Jon Stanhope predicts there will be no change in Kurrajong.

Veteran electoral mastermind Malcolm Mackerras has spent a lifetime studying federal and ACT elections. The honorary fellow of Australian Catholic University has analysed the results from last year’s federal election and is also predicting little change in the seat of Kurrajong.

Were that result to be replicated at the ACT election, Labor’s chances of picking up an additional seat would improve. However, as Mackerras points out, voting intentions don’t always align in federal and territory elections.

Labor enjoys a happy hunting ground in the ACT having held power uninterruptedly since 2001 at a territory level. Similarly, the ACT’s federal House of Reps seats have not been touched by a Liberal since the 1990s — and even then the member, Brendan Smyth, was thrust in through a by-election but his seat returned to Labor 13 months later.

Mackerras argues the ACT is “so naturally left leaning” that it is “distinctly” more likely that the Barr government will be returned”.

“But the Liberals will win three of the five in Brindabella and Murrumbidgee and two in Kurrajong, Ginninderra and Yerrabi. That leaves Shane Rattenbury who will win his seat in Kurrajong as holding the balance of power so that’s 12 Labor, 12 Liberal and one other and the other is Shane Rattenbury and that makes the 13 to 12, a left-leaning majority.”

What does history tell us?

Kurrajong represents the core of the old electorate of Molonglo. It was created in 2016 when the five-electorate, 25-member ACT Assembly was first introduced, replacing the old three-electorate, 17-member chamber.

The old electorate of Molonglo has traditionally been the most favourable for minor parties or independents, always returning at least one MLA from outside the two major parties.

Moore predicts the Liberals’ Candice Burch’s position is less safe than the others, and will be the most contested seat. Burch finished behind the late Steve Doszpot at the last election but was re-elected to replace him.

Burch’s vulnerability hinges on a strong independent candidate or a minor party securing a decent percentage of the vote. However, as an incumbent MLA you would expect her personal vote to increase upon last time.

“Shane will do okay, he will secure the fifth seat [in Kurrajong] because people want to vote Greens, and people are disappointed with Labor,” Moore said.

“Barr will get a couple of quotas, Lee will stay, Stephen-Smith has done a good job through covid, but Candice Burch is vulnerable.”

Kurrajong a ‘good mix’ of Canberra

The electorate spans the central suburbs of Canberra on either side of the lake, stretching from Red Hill in the south to Watson and Downer in the north.  It also takes in the city centre, the parliamentary triangle, the inner-south suburbs of Barton, Kingston and Manuka, and the inner-north suburbs of Turner, O’Connor, Lyneham and Ainslie.

Council (ISCCC), and longtime inner-south resident, describes the electorate of Kurrajong as a “good mix of Canberra”.

Contrary to popular belief, Fatseas says there is wealth disparity

in Kurrajong, with the largely affluent inner-north and inner-south suburbs only a section of the electorate’s make-up.

“If you look at Narrabundah, for example, there are two areas; there’s the old Narrabundah which is east of Sturt Avenue and Jerrabomberra Avenue and that’s about 30 per cent public housing and then you’ve got the other side which is west of Jerrabomberra and Sturt Avenue, which has a different profile so we are a diverse community and often people don’t realise that,” Fatseas said.

What are voters talking about?

Rising rates are still a big issue among voters this election, but Fatseas says it’s not the top concern.

“We did a survey, we had 550 respondents and their top concern was the maintenance of street trees, verges and parks, municipal stuff that councils usually do in other states,” Fatseas said.

“A lot of people feel those municipal functions have not been looked after very well, and the second major concern was planning.”

Given the keen attention that developers pay to the area, Fatseas says voters in Kurrajong are worried about the rate and quality of development and planning transparency.

With parts of the electorate nearly 100 years old, there’s growing concern that developments will put the area’s heritage at risk.

ones that are left, are heritage listed,” Fatseas said.

“And so there’s a strong mandate from the community to say that they won’t stand for the whole of the inner south being turned into apartments.”

Transport is another key issue.

“All those buses that come from Woden to the city don’t stop along Adelaide Avenue and so we have to take the slow bus to town and on weekends it’s very irregular.”

Okay, so who else is running?

Rebecca Vassarotti is running again for the ACT Greens along with Adriana Boisen and Michael Brewer.

The Canberra Progressives have fielded three candidates in Kurrajong; Therese Faulkner, Peta Swarbrick and social-media guru Tim Böhm. Böhm is running a large slice of his election campaign via social media, a clever move in this climate. He’ll be an interesting candidate to watch. While the Progressives may poll reasonably well in Kurrajong, it is difficult to see a clear path to securing a quota and claiming a seat in the Assembly at the expense of the major parties. Other minor parties are yet to announce candidates for Kurrajong.

The odds heavily favour the five incumbents being returned. Labor will pin its hopes on the strong personal following of Andrew Barr, who received more than 10,000 votes at the last election. That was 4000 more than the Greens’ Shane Rattenbury and 6000 more than the Liberals’ Elizabeth Lee.

It will be interesting to see whether Stephen-Smith’s performance as Health Minister will boost her chances of improving her personal vote. The other less likely option would be for an independent or a minor party such as the Canberra Progressives challenging for a quota and making Burch’s position less secure.

Profile:  The electorate comprises the districts of Canberra Central, Jerrabomberra (including the suburb of Hume), Kowen and Majura.

The name Kurrajong is derived from the Aboriginal word for the tree Brachychiton populne site of Parliament House.

Election 2020: South tipped to stay true to the Libs

CityNews - September 19, 2020
0
THE Canberra Liberals are promising a purpose-built multi-cultural and community centre for Gungahlin in the run up to the ACT election next month.

More walk-in centres, but do they ‘hide’ hospital problems?