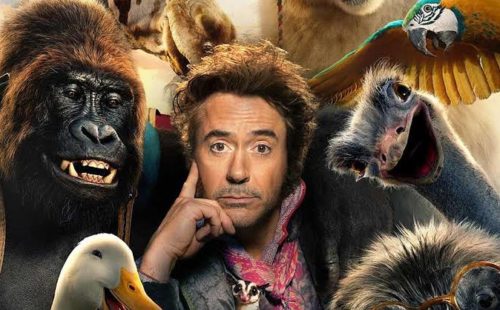 HUGH Lofting had been dead for two decades before the first appearance of his children’s book hero in moving images on cinema screens.

In 1967, Rex Harrison played the doctor who could “talk to the animals” and Leslie Bricusse wrote some great songs. Dr Dolittle has since sired an animated TV series and 11 movies, the essential thing about which is that reality or credibility simply ain’t in it.

The doctor can do anything, go anywhere, survive any disaster. Queen Victoria is lying in the palace dying. Lord Badgley (Jim Broadbent) and Dr Mudfly (Michael Sheen) have their own reasons for wanting to be rid of Doctor Dolittle (Robert Downey Jr). He and his youthful assistant Stubbins (Harry Collett) go to sea in a ship carrying, among other animals, a timid gorilla, a polar bear, a parrot, a dragonfly and other living creatures, in search of a book compiled by the Doctor’s late wife.

That rather depends on your reason for watching it. If you’ve not yet started school, you’ll probably say yes. If you are at school, you might wish it was more serious. If you’ve reached double-digit age, you might wonder why little kids think it’s so much fun. If they’re your kids, they’ll tell you after you’ve watched it.

Danielle Nohra - September 16, 2020
0
ALMOST $190 million worth of contracts were awarded without competitive tender by the ACT Community Services Directorate in its most recent year of public reporting, reports DANIELLE NOHRA.