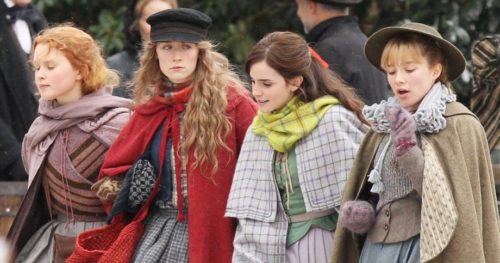 THE first title in Louisa May Alcott’s quartet of novels telling the stories of the March sisters and their immediate families has since 1917 spawned 35 movies and TV episodes with exact title matches.

And nearly 170 other moving-image productions created by impresarios who knew a good thing when they saw what others had built on the same literary foundations.

An impeccable source has told me that the screenplay written by Greta Gerwig for this production draws on incidents from the full spread of the novels.

And that there’s a goodly supply of material in the screenplay that Ms Alcott never wrote. In that, she’s in good company, alongside writers as enduring as Shakespeare.

When someone wants to adapt material an from out-of-copyright story by a dead author into a movie, only their own good sense need deter them from doing it their way. The most recent of those in the “Little Women” liturgy was Clare Niederpruem’s version which was both released and set in 2019. Last September, I gave it three stars.

Ms Gerwig’s film looks good, especially the exterior scenes. The music touched my soul because it was all composed before the Civil War. Filmed in and around Concord, Massachusetts, it offers some authenticity of place.

In sequences where they are together en masse, the sisters too often behave like shrieking giggling hoydens, which is regrettable, if not downright contradictory to what Ms Alcott might have intended!

Playing them are one Irish actress (Saoirse Ronan as Jo), two English ones (Emma Watson as Meg, Florence Pugh as Amy) and an Australian (Eliza Scanlan as the ill-fated Beth). Laura Dern gives a muted portrayal of Marmee. Meryl Streep, faultless as usual, plays Aunt March.

Timothée Chalamet is somewhat wan as Laurie whose love for Jo is not going to succeed. Tracy Letts plays publisher Dashwood dealing with a determined Jo; one suspects that Ms Gerwig wrote him as burdened by an unrequitable love. Frenchman Louis Garrel plays Amy’s German suitor Friedrich.

I mostly find myself watching movies alone or with only a handful of others. I don’t think it was because of the weather that the New Year’s Day mid-morning session when I watched “Little Women” was well patronised.

With a reported cost of $US36.5 million, its worldwide takings since premiering in New York on December 7 have reached $US44 million in a mere 38 countries. Not a blockbusting number but it’s early days.