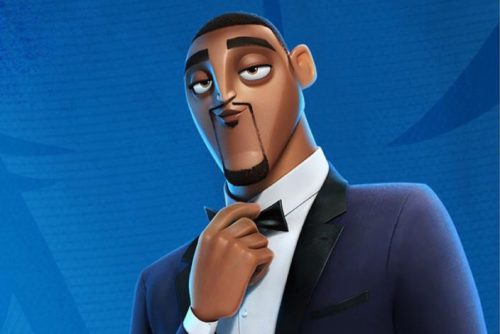 THIS is an animated spoof of every super-spy hero movie ever made. And it’s not half bad!

Plot? What plot? Is it a race to beat the baddies to achieve their dire intentions for world domination? Or worse? Is it a race to fulfil a madman’s dire ambitions to rule the planet? Who cares? Any movie in which one of its two heroes accidentally gets turned into a flying rat a.k.a pigeon has to have something going for it.

Lance’s problem. Someone spiked his cocktail with something that turned him into a pigeon. Is he destined to spend the rest of the movie being small, vulnerable, blighted by internal plumbing that uses only one orifice to dispose of both waste products? What are his prospects for shedding this debilitating transmogrification and becoming his old suave self?

Every super-hero movie has its own mad scientist. This time, it’s Walter (Tom Holland’s voice). Walter graduated with honours at age 15. Give him enough time and he’ll sort out Lance’s problem (and when it happens, it’s a real doozie!)  “Enough time” occupies the film’s main body.

Sitting in front of me watching “Spies In Disguise”, the only other patrons were a mother and two small  boys. The boys got a lot of laughs. And mum chipped in from time to time. It’s that sort of movie.

After a very long list of closing credits, a slide came up, announcing that 12,000 people had worked for a million hours to create “Spies In Disguise”.  Those people don’t come cheap.  The result of their toil is a movie reportedly costing $US111 million, that opened in Hollywood on December 4 and by the end of that month after opening in all but a handful of countries worldwide (excluding Australia) had earned only $US91 million.

I don’t think that blame for such a meagre performance during a main movie-watching period should fall on the shoulders of directors Nick Bruno and Troy Crane, or writers Brad Copeland and Lloyd Taylor. But heck, making movies costs big dosh and somebody’s head’s gotta roll.

CityNews - January 23, 2020
0
THE Bureau of Meteorology issued a Fire Weather Warning for the ACT at 11am (January 23) as winds howl, the temperature rises and dust beleaguers the city.