Her entry, Neptune necklace, is an elaborate shell necklace made of layered pippy shells (bitjagang) threaded with seaweed beads – ”a continuous thread of ocean jewels,” she says.

Back in 2013, Canberra’s Jennifer Kemarre Martiniello was named winner of the $50,000 Telstra Award for her work “Golden Brown Reeds Fish Trap” made of glass, and Hurst follows her in reinventing traditional forms and materials to make contemporary art.

It’s been a good year for Hurst, who works for Nationals Parks by day and runs her online art business Gillawarra (“resting place” in the Gathang/Kattang language) Arts and Crafts by night.

After being named a finalist in last year’s Telstra Awards and the ACT Indigenous Business Awards, this year she facilitated her first weaving workshop at the NGA, conducted Aboriginal jewellery workshops at the National Museum and exhibited work at First Draft gallery in Sydney and in “Emerging Contemporaries” at Craft ACT.

Hurst has been living in Canberra for more than 10 years, having first come here to study for a BA in environmental science and cultural heritage at the University of Canberra.

“It’s been incredible to be on Ngunnawal country,” she tells us.

“It keeps me connected when I’m so far away and always thinking about home, that’s why I do art.”

Home to Hurst is the mid north coast of NSW, from which she identifies as a Worimi woman. More specifically, her parents grew up on the Aboriginal reserve Purfleet, now a suburb of the greater Taree region.

“My arts education started in the 1980s living on the mission back home, it was the way the community came together and I took it from my parents… to me it’s about continued cultural practice and stories talked through art practice.”

Hurst’s jewellery, with its images of native animals and use of natural materials, illustrates that intention.

“I’ve always been doing art ever since I was little – it’s what my mum and dad did, painting and making jewellery, so I felt it was good to be into art,” she says. But being a practical kind of person, once here in Canberra she started working out how to make it pay through her sophisticated website gillawarraarts.com, through which she also runs workshops in weaving, jewellery, painting and linocuts.

“It’s wonderful allowing other people to learn about Indigenous art, which is so rich and beautiful here in Australia,” she says.

During COVID-19 she’s also been running a weaving circle every Friday night on Zoom to keep up connections with Aboriginal women, and describes it as “really nice, I started with raffia and natural plant fibres and it’s grown, it’s a fun thing to be part of”. 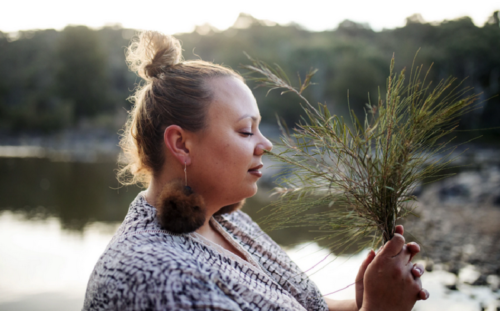 Hurst identifies strongly with the ACT arts community saying, “so many of our people in the arts sector have taken a huge hit during COVID-19 but what’s happening in the social media is interesting and many indigenous artists like me are really going for it”.

She views jewellery as a form of fine art and says she wants to do more solo exhibitions. To that end she applied for and won an ACT government activities grant of $12,585 to create a body of work that responds to “the symbology of Aboriginal sovereign jewels and British sovereign jewels”.

So, what can she tell us about the Telstra Awards? Not a lot, she says, as one of the stipulations of the award is to maintain silence until the announcement awards ceremony on August 7.

“It’s a piece I created for my ancestors,” she says.

“While making this piece, I thought of my mother, my grandmothers and many ancestors before… I imagined the type of adornment they wore to feel strong and proud, to tell our mob who they were and who they were connected to.”

“I used shells I collected and fused them all together with seaweed using fishing line. It’s quite a big piece with lots and lots of shells. I really just wanted to create something in honour of all of the matriarchs who lived and passed on, since it’s important to show the role of Indigenous women as knowledge holders.”