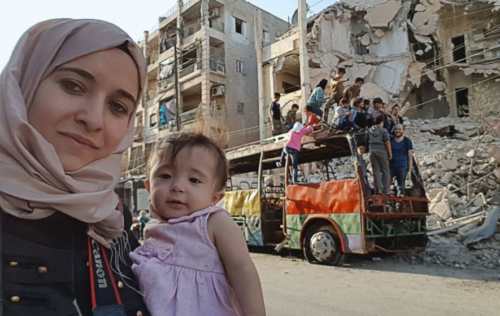 THIS remarkable documentary has been nominated for an Oscar. The competition in that category looks fierce.

“For Sama” deals with medical heroes during terrible times as an autocratic regime hurls military might against Kurdish-led forces seeking a democratic government of Syria.

“The Cave” gives an indication of covering similar matters. At the Oscars, will “National Geographic’s” might and power overwhelm this similar, uncompromising, insider’s view of the siege of Aleppo?

“For Sama” was shot mainly on a mobile phone by Waad Al-Kateab during the closing months of a four-year siege that has reduced much of the world-heritage-listed city to rubble.

Made in co-operation with British director Edward Watts, it’s a distillation of some 500 hours recording how a final-year economics student at Aleppo University bore daughter Sama (meaning “Sky”) while helping medico husband Hamza to care for the dead, the dying and the surviving living. They are a remarkable couple.

There’s no plot to this BAFTA-winning record of terrible events. Waad shows what it looked and sounded like, leaving it to the filmgoer to imagine the stink of death, the fear, the hunger and the thirst.

She captures the courage, the determination of the people, particularly the women, and the mordant humour of people trapped in a war they didn’t make. Throughout, her film accepts the brutality of the experience with little concern for self, but great concern for husband and children, hers and those of dead parents.

I came away from it thinking about that other evil influence that eight decades ago began to pervade a new, much different kind of war in which civilians and homes were military targets. Most of all, I can’t help wondering what might be the views of the authors of the Christian Bible and the Muslim Koran about conflicts that have arisen out of their well-meaning attempts to explain what in those times was inexplicable and despite science’s best efforts still is.

“For Sama” is not “nice”. It deserves to be seen. Apparently it’s been broadcast on TV in other countries. Whether any Australian TV channel will have the guts to broadcast it uncut is a matter for conjecture.

CityNews - May 15, 2021
1
AS the ACT government begins its annual kangaroo cull, animal welfare activist Robyn Soxsmith has labelled the killings as "not humane".