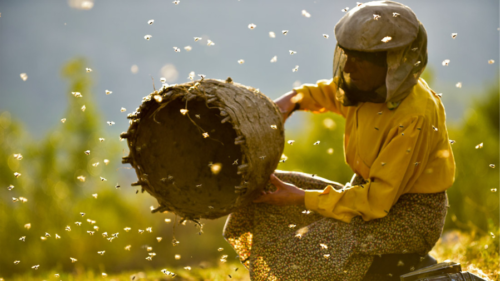 ABOUT 55 kilometres south-east of Macedonia’s capital city Skopje is a tiny settlement called Bekirlija, of human life at its most basic in tiny houses built of local stones piled one on another.

At the 2019 Oscars, Tamara Kotevska and Ljubomir Stefanov’s film about life in Bekirlija was nominated in Best Foreign Language and Best Documentary. Since opening last August, it has been nominated for honours at 46 film festivals and won 32.

As of this week, its worldwide box office takings were less than $US900,000.

Running for 89 minutes, it’s a beautiful film, simple yet powerful and perceptive in its messages about love, survival and unexpected yet obvious relationships between natural phenomena. Its story honestly depicts human strengths and weaknesses as characters, playing themselves, unconstrained by any screenplay, get on with living in the only way they know.

In her forties, unmarried Hatidze’s life follows a simple routine. Wake up. Tend to the beehives. Harvest honey and back-pack it in the comb to the nearby market town. Negotiate price with regular buyers. Buy a few necessities. Walk home across a landscape made into a background of sere beauty by multi-award-winning camera-persons Fejmi Daut and Samir Ljuma. Cook a simple meal for querulous, bed-ridden mother Nazife and feed it to her, often against her will. Sit in the dark and talk, sometimes quarrel, with Nazife. Sleep. Tomorrow will bring the same.

The Sam family moves in to Bekirlija – Hussein, Ljutvie and their raucous children ranging from early adolescence to toddler. Their view of the land is diametrically opposite Hatidze’s, who leaves half of every hive for the bees. Hussein will take the lot and haggle with a bulk buyer. Their cattle graze the grass from which the bees derive the honey.

Alone, Hatidze might find their disruption not so much unconscionable as uncomfortable. She recognises the Sam family for what it is – nomadic exploiters who won’t stay, who will take everything before moving to new ground.

“Honeyland” is indeed a parable, told with simple beauty and power.