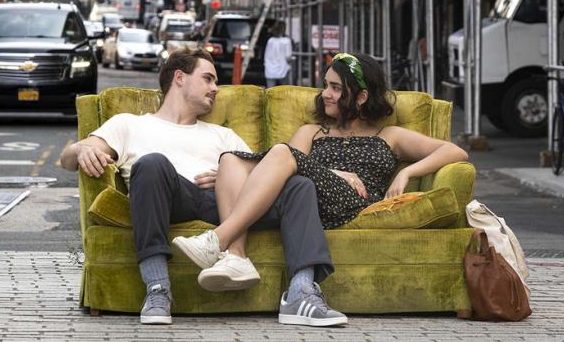 THIS is writer/executive producer /director Natalie Krinsky’s debut feature after a career in writing episodes of American TV series. Does it reflect her own experiences or has she assembled the story from scratch? Only she and her confidantes know. Does it matter?

It’s essentially about finding something positive out of heartbreak. The plot centres on Lucy (Geraldine Viswanathan) living in an all-girl, shared New York apartment. Lucy has just been fired from her gallery job. In a plot that depends to a moderate degree on happenstance, after drowning her sorrows she jumps into a car that she mistakes for her Uber and asks to be driven home.

The driver is Nick (Dacre Montgomery) who has spent five years renovating a run-down hotel named after his girlfriend at the time the job began. Hang about while Lucy gets the idea of establishing her own gallery filled with other people’s reminiscences of their failed relationships. After some frank girl-talk, Nick bumps into her. By accident? By design? Does it matter?

For the filmgoer, the experience may be agreeable or a trip to ho-hums-ville. I doubt that its strong collection of girlie passages has the strength of purpose to appeal to red-blooded blokes. Or to girls who love girls.

It’s fair to say that Geraldine Viswanathan carries the film through ups and downs to an ending that was predictable from the moment that Nick re-appeared. And that the gathering at the opening of Lucy’s Broken Hearts Gallery looks little different from other gatherings with similar purposes in other movies.