“If the framing of the movement to pull down statues was based on sexism instead of racism, there would be very few statues remaining,” muses political columnist MICHAEL MOORE.

WE do not burn books nowadays. We pull down statues. According to Ray Bradbury, in his 1953 novel, books burn at 451 degrees Fahrenheit.

Bradbury and contemporaries such as George Orwell were warning about the dangers of rewriting history. And those dangers persist.

The righteous fury is understandable. The movement to destroy statues of people who have done great wrongs has some appeal. After all, behaviour that abused or enslaved people, that brought about widespread suffering or included murder ought not be celebrated.

The anti-racist movement has given impetus to the ideas of pulling down statues. Racism is the antithesis of a healthy democracy. The current Black Lives Matter demonstrations in the US and Australia are an important opportunity for all of us to think carefully about the past and what actions have been taken that have embedded all forms of racism. More importantly, what actions we will take now, and in the future, to undermine all forms of racism.

However, there are better methods of going about righting the wrongs of the past than using Orwellian tactics. Our understanding of history does need to be enhanced. A plaque at the base of such statues could emblazon, for example: “This man was responsible for deliberate murder, massacre and rape”.

In drawing attention to the statue of Captain James Cook in Sydney, which credits him with “discovering Australia”, Stan Grant is right to raise concerns. Stan’s people had been here for more than 40,000 years before Cook’s arrival.

However, it is also an opportunity to provide accurate historical information on his role as a navigator along with his treatment of the indigenous peoples. Visitors to such statues could learn about his navigation skills along with understanding about the impact he had on indigenous peoples and culture in Australia and in other countries that he visited such as Tahiti, NZ and small Pacific Islands such as Huahine, Bora Bora and Raiatea.

Nathan Moran is a Goori man and chief executive officer of Sydney’s Metropolitan Local Aboriginal Land Council. In an interview with SBS News recently, he argued for the statue of NSW governor Lachlan Macquarie (1810-1821) to be taken down because Macquarie “determined it was appropriate to declare war on our people”.

Mr Moran cited Macquarie as allowing Aboriginal people to be “hung from the treetops”. The Appin massacre of 1816, where his troops killed at least 14 Aboriginal people, was authorised by Macquarie. At the base of this statue could be a plaque with an eye-catching headline such as “Macquarie attempted local genocide” and then be followed by some of historical details that are recorded in the National Museum of Australia and other sources.

There is an old saying about history being written by the conquerors. Even the original historian, Thucydides identified his own prejudices in “The Peloponnesian Wars”. Effective history recognises all aspects including those who conquered and those who suffered. Nathan Moran’s accusation is that Macquarie was “at the forefront of the genocide of our people, and the dispossession of our people”. This ought to be included in accurate historical writing and ought to be part of any description at the base of statues.

One of the most murderous men of the last century was Joseph Stalin. Travelling across Russia, there were very few of his statues to be observed. This was an opportunity missed for generations of Russians to know and understand the dangers of absolute power. Perhaps the Putin referendum would have a different result if this aspect of Soviet history was at the base of the once many statues of Stalin.

On another level, having been built by slavery for the benefit of one despot, should the pyramids of Egypt be pulled down?

If the framing of the movement to pull down statues was based on sexism instead of racism, there would be very few statues remaining. Embedded sexism has really only been confronted in the last half century. It is not so long ago that a woman who married was required to resign from the public service and other jobs.

There are more effective ways to deal with evil people of the past. Pulling down their statues provides a temporary feeling of success. Identifying their evil deeds is likely to have greater long-term impact. 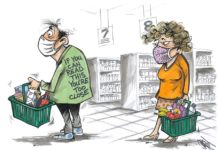