"Despite strategies and plans, public education has not improved greatly in the last five years that Ms Berry has been Education Minister," writes political columnist MICHAEL MOORE.

THE ACT Auditor-General has dealt yet another blow to the perception that the ACT is doing well in educating the next generation.

Early last year Education Minister Yvette Berry was making excuses after the ACT education system was identified as doing poorly through the NAPLAN scores. It seems things have not improved and it is time for action.

In a series of recommendations in the report “Teaching Quality in ACT Public Schools”, the Auditor-General has set out a framework for improving education through better support for teachers. Recognition is given for many of the outstanding teachers in our system although appropriate support for our teachers is seriously lacking.

The report begins with: “Teaching quality is acknowledged as the single most important factor influencing student performance within the control of education systems. The quality of teaching practices has cumulative and residual impacts on student outcomes. Contemporary research demonstrates that students taught by highly-effective teachers learn at twice the rate of their peers.”

This should come as no surprise. We can all remember the impact one or two special teachers have made on our lives. The Auditor-General quotes the evidence: “Studies showed that students who are taught by a succession of three high-performing teachers scored 49 per cent higher on school assessments compared to students assigned to teachers with ineffective practices over a three-year period.”

The ideal would be that all of our students have a series of effective teachers. If this were the case, our NAPLAN scores would be higher than other jurisdictions, rather than lagging so far behind when adjusted for socio-economic advantage.

The Australian Curriculum, Reporting and Assessment Authority (ACARA) takes into account four factors to allow the best assessment of the quality of education for all children regardless of advantage or disadvantage.

Last year Minister Berry argued that comparisons are unfair in such a highly educated population saying, “65 per cent of ACT students have a parent with a bachelor’s degree or above, compared to the national average of 35 per cent”.

However, ACARA is right to take this into account and, with this significant advantage, Canberra should be way ahead of all of the other Australian jurisdictions.

The Auditor-General drew conclusions from a close examination of six schools and how they fit into the structure that facilitates support for teachers. The report identified glaring gaps in this support and proposed a series of recommendations if teachers in public education are going to have the appropriate support to optimise their skills.

While the Auditor-General focused specifically on support to improve the skills of teachers, Liberal education spokesman Jeremy Hanson has been calling for a full and thorough examination to explore how the education of our children can be improved.

In June, Mr Hanson released "Bringing Out the Best in Every Child", a Liberal Party strategy to tackle the problems. It details how the ACT government is failing school children and outlines a vision for the future while calling for an independent review into the ACT school system.

Mr Hanson said: "Our analysis has shown that school governance and funding are sub-optimal and have declined in the past decade”.

The strategy “outlines a way ahead" across the areas of academic standards, equity, bullying and violence, school funding and overcrowded schools with ageing infrastructure.

It calls for an appropriately high level inquiry looking at all of the factors that have resulted in such a decline in standards over the last decades. Despite strategies and plans, things have not improved greatly in the last five years that Ms Berry has been Education Minister.

Labor should step on to the front foot and open its own inquiry. It's never too late for a serious and comprehensive investigation to lay down a positive structure and direction to improve the education of our children. 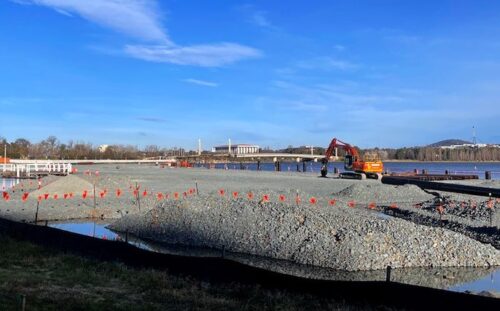 "This next stage of light rail is a political statement and damn the consequences for other priorities – health, housing and education," writes "Canberra Matters" columnist PAUL COSTIGAN.