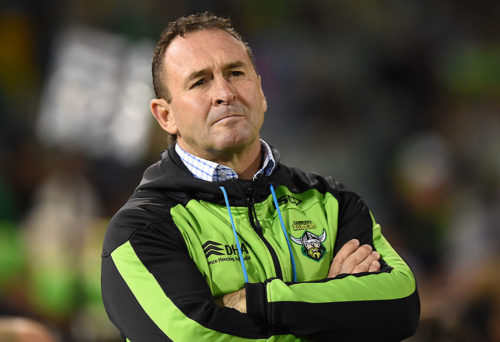 A TACTICAL misunderstanding with a NRL rule only introduced into the game late in the season has put Ricky Stuart's coaching tenure under further pressure.

Canberra could have faced an inquiry and the stripping of two points had the side held onto a lead against St George Illawarra on Saturday and won rather than the inevitable Raiders' second-half fadeout to lose.

The Canberra Raiders coach had mistakenly thought he could bring on his 18th man, Xavier Savage, to replace injured centre Sebastian Kris after half-time.

In the final seconds of the opening half, Dragons rival Jack Bird hit Kris on the back of the head and was placed on report.

Stuart believed from the incident that Savage could be interchanged into his debut, only to learn from the ground manager minutes later that Bird had to be sin-binned or sent off to enact the change.

The breaching of the rules was recognised after the Raiders' 22-20 loss at Wollongong.

The club could still be sanctioned for the move despite no NRL official preventing Savage taking the field.

"That was my fault," Stuart said.

"When a player gets put on report I thought I'd use my 18th man - I had no outside back on the bench.

"There's a lot of confusion that goes on, there have been a lot of rule changes this year, I get the mistake - I made it."

Stuart after the game was insistent that the 18th man rule should have broader appeal to cover all injuries.

The 18th man, outside of the four players on the interchange bench, was introduced into the NRL following the first four rounds of the 2021 season had already been completed.

The NRL recognised a number of early-season head injuries had forced its hand to issue a fresh replacement when either three players fail a head-injury assessment or one suffers a match-ending injury after the offender is either sin-binned or sent off.

Stuart not only apologised, but realised his poor judgement could also have more serious implications.

"We make errors. If we jumped on every error we've made, nobody would have a job," Stuart said.

"Fortunately, we didn’t win because it saves a few blokes, myself included, some skin."

Canberra led by 12 points early and 14-6 by half-time before conceding three tries to one in its eight defeat in the past 10 appearances.

The Raiders great coached the side to last season's preliminary final but has already battled accusations this year of losing the support of his players and that former halfback George Williams was sacked despite pleas of suffering mental health issues were ignored.

Savage had to be dragged to the sidelines after just 12 minutes, initially the 19-year-old believed he mucked up on debut.

The very chance had even brought his family to fly down from Cairns just in case.

"I said to him after the game 'at least you got a taste'," Stuart said.

"He's a great young kid. There's a lot of first grade ahead of him.

"He'll certainly have a story to tell his kids one day about how he got his first taste."