AFTER crusading for the unloved old Starlight Drive-in sign, CC salutes the developers of the old Sunrise motel in Queanbeyan. 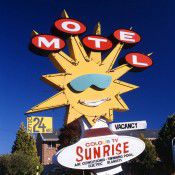 They had the wit to incorporate the sign into the apartment block that bears its name. And just for the nostalgia, here’s a 1993 picture of the original motel sign, taken by local photographer Col Ellis, of Col Ellis Fine Art Photography. How wonderful to remember when colour television was a selling point and, below, left, we see the promise of a waterbed, whatever that was!

IT’S the festival with an identity and timing crisis. In less than two months the third Enlighten festival will be staged and last week Tourism and Events Minister Andrew Barr announced a preview program to entice us to book tickets.

CC thinks it looks pretty good with more light projections in the Triangle and behind-the-scenes events at the national attractions returning, though we struggle to understand what Enlighten is really all about.

However, most baffling is that the full program isn’t to be released until February 1– just a month before the event starts.

Is this teasing now ACT Government policy after Robyn Archer released volume one of the Centenary program and left us waiting for part two? Or is it more likely that the once-promising Enlighten program is still a work in progress?

THE city’s scruffiest newsagency is no more. After 23 years, proprietor David Bedford has thrown what’s left of his shop into a giant skip, which means Yarralumla will no longer have a local, active newsagent.

He closed with a telling note on the window blaming most everything for his demise.

“Termination of the business has been caused by a large drop in circulation due to factors such as the GFC, the rise of the internet as an alternative to newsprint and a general malaise in retail spending.”

However, he rattles on to accuse News Limited and Fairfax (owners of “The Canberra Times”) of hastening the demise of small newsagents with a national distribution system that “requires newsagents to surrender their runs to a centralised system without compensation”.

“This policy will result in Yarralumla newsagency along with many other suburban newsagencies to become redundant,” he predicts, probably correctly.

His lips are sealed

LOOKING for a lawyer born to discretion? Spotted on holiday, Phil Lipshut’s practice in faraway Nhill, in Victoria. With partner Maurice Stewart, 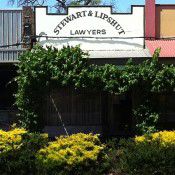 he offers more than a century of, no doubt, discrete experience.

PROVING you don’t have to be dead to be remembered, the very much alive former senior public servant Tony Blunn, pictured, has had an island named after him. Like its namesake’s intellect, Blunn Island is not for the faint hearted though. It’s in Antarctica. Not that he’s ever been there, which gave rise to one wag saying: “The only other person that I can think of in that category was Queen Victoria”.

For the record, the Australian Antarctic Data Centre diligently records Blunn Island in the official gazettal notice as being: “An irregular shaped island about 0.5 km north east of Cronk Island in the Windmill Islands. It is named for Anthony S Blunn, who as Secretary of the (then) Department of Arts, Sport, Tourism and Territories was responsible for the Antarctic program between 1987-1993 and supported the Antarctic Division in obtaining the icebreaking research vessel RSV Aurora Australis and enhancing the focus on scientific research.

“Between 1983-87 he was Secretary of the (then) Department of Housing and Construction which was responsible for the rebuilding of Australia’s Antarctic Stations. In this capacity he ensured that his Department directed the rebuilding program on the basis of the requirements of the Antarctic Division.”

2. Show-and-tell at the end of last year had one six-year-old turn up to school with her pet parrot in a box. All well, until the teacher discovered the parrot was no more, it was deceased. Despite the temptation to recreate some Monty Python moments in the staff room, the dead bird was sensibly parked in a fridge until home time.

3. When the brain and tongue don’t properly connect: Canberra father, discussing hats, wanted to explain to a packed car that he had a large head. He went to say “skull”, switched to “cranium” and it came out, ahem: “I have a large scrotum”, which left his daughter-in-law (and everyone else on board) in jaw-slackened silence for some uncomfortable distance.

4. JUST when you thought it was safe to return to the supermarket… Woolies is already selling, yup, hot cross buns!

CityNews - March 30, 2020
0
Five travellers who flew into Canberra on Saturday morning have been sent home to self-quarantine while two will remain in quarantine at an ACT hotel.