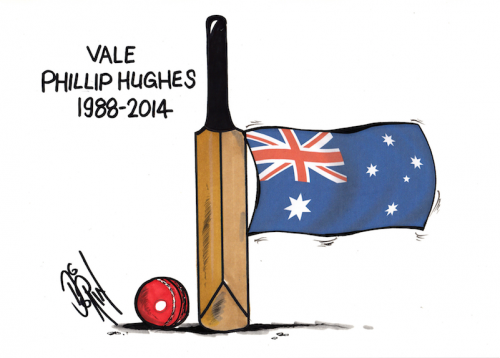 I’D been sent to record a radio interview with Phillip Hughes, among others, in the lead up to the Prime Minister’s XI game of 2009. I’d heard a bit about young Hughes, but I hadn’t even seen footage of him playing. I felt vastly underprepared for the interview.

At the time the dogs were barking his name as a potential superstar. His state cricket stats were astounding and Mark Vergano, of Cricket ACT, told me to prepare to see a young man take the bowlers on with impeccably timed batting aggression.

I didn’t even know what he looked like, but I was expecting an imposing figure and while I was waiting somebody’s teenage son or the work-experience kid came in, looking lost.

This boy looked as though he should be wearing a school uniform. He was a diminutive figure with “just-got-out-of-bed” hair and an air of what seemed to be aloofness, but before long could be seen as country-boy shyness.

Phillip Hughes was a really nice lad, but it was a shocking interview. Softly spoken and of few words, he gave me lots of “yes” and “no” answers and his voice was so quiet that parts of the audio were lost.

I don’t know that any more than 30 or 40 seconds was used on air, but that meeting left an impression on me. I was struck by the pure simplicity of this freakishly talented young man who didn’t want to be a media star… he just wanted to make runs.

He didn’t make many at that PM’s XI game at Manuka Oval. He opened the batting with Michael Klinger and made 20-odd in what was a successful run chase led by the then unheralded George Bailey.

Since that day, I followed his career very closely, excited to see him break into the Australian side and then to score those early tons on tour against South Africa.

Wasn’t he a joy to watch? In those very early years there were imperfections in his game. His footwork was non-existent on occasions and he was yet to discover the leg side of the ground. I’d be so nervous whenever he came to the crease because I knew the selectors had little patience for early dismissals.

Once he got his eye in, he was unstoppable. He was a courageous excitement machine who was always looking to move the game along and keep the scoreboard churning.

It’s still difficult to comprehend that he lost his life to the game that he loved.

Phillip Joel Hughes, the game will miss you. Thank you so much for everything that you gave to us cricket fans. We are much richer for seeing your talents on display. May you rest in peace.

One year on: emergency services braced for hail and storms