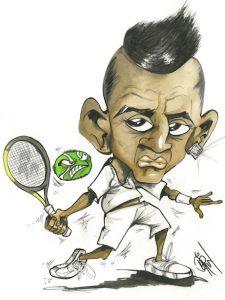 Aaah, Nick. If only you would shut up and let the racquet make the racket.

The latest misdemeanour (assuming that there’s been no other viral disaster between time of writing and your reading this), was the absurdly childish sledge (“Thanasi Kokkinakis banged your girlfriend, I’m sorry to say, mate.”) of opponent Stan Wawrinka in Canada.

Seriously, Nick, is that the best you could come up with?

How Australian is it to make such a personal attack on your opponent and finish by addressing him as your “mate”?

I’m a little surprised that he was fined $10,000 because I thought it so stupid a sledge that it should have just been ignored or even laughed at. I would laugh at a sledge like that in a way that said: “You juvenile moron! If that is your best shot then you’ve got nothing.”

But no. We’ve had a social-media war, fines have been dished out and apologies have been made. Stan was “really hurt” by the comments and I’m assuming that our Nick will become the Adam Goodes of the tennis world…. with all respect to Goodsey.

The whole theory of the sledge is to say something to your opponent that takes his focus from the task at hand and enables you to beat him.

I played a fair bit of regional AFL in younger years, so I know all about sledging. In my time kicking the footy around in WA and NSW, I heard at least 500 sledges worse than Nick’s.

I was furiously sledged every single game, which I took to mean that my opponents had a higher opinion of my game than I did. It was suggested often that I was homosexual, which I gather was a somewhat negative thing. Whatever?

I always tried to be a little smarter with my sledging.

I remember asking number 44 from Warners Bay about his teammates bullying him. It actually struck a chord with him and he asked me how I knew.

I replied that I thought it was a really cruel thing to give him a jumper number that he couldn’t live up to. He tried to land one on my jaw, but I dodged it.

Best sledge I ever made ?

Well, it wasn’t a sledge in the strictest sense of the word, but I’m really proud of it. I was playing back pocket for North Coffs on a dirty winter day at Woolgoolga. My opponent had taken a mark and was taking a set shot for goal. I was standing the mark.

This was traditional country football in that the cars were all parked around the perimeter of the ground. I’d seen my opponent arrive at the ground so I knew what sort of car he drove.

As he ran in to kick the goal I shouted at him, “You drive an old Statesman, don’t you buddy?”

I got his attention.

He missed everything and put it out on the full.

Sponsored Content - February 19, 2020
0
After a devastating holiday period, Braddon’s Mercure Canberra is calling on locals to have a staycation at one of the ACT’s most historic hotels. This is a sponsored post.