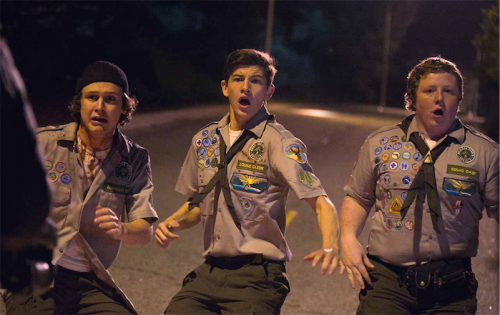 I CAN perceive no better explanation for this comedy/zombies mish-mash that writers Carrie Lee Wilson and Emi Mochizuki have given to director Christopher Landon to play with, other than that presumably producers base funding decisions on reliable demographic data.

It’s a satire of the world’s oldest youth organisation, focused on a moribund three-person troop based in the high school of a small American town.

Ben, Carter and Augie each have their own reasons for being Scouts, none of which has real merit. The adult leader is a teacher motivated by the power he exerts over the group, which we first meet when a recruiting drive produces no new converts.

It’s time for the end-of-year camp, while their schoolmates are partying at a secret location. By some unexplained phenomenon, the town’s adult population has become zombified.

The trio is joined by Denise, employed in an industry where big-bosomed women constitute the workforce. Denise has a shotgun. It’s going to come in handy until she runs out of ammo.

Zombies run around town looking for live humans to recruit into their fraternity or sorority until Denise and the Scouts destroy them. It’s same-old same-old stuff, unjustified by rationale or reason. In a word, boring.

CityNews - April 7, 2020
0
A mediation process will be set up in Canberra to ensure that struggling tenants can come to a reduced rent agreement with their landlords during the coronavirus pandemic.