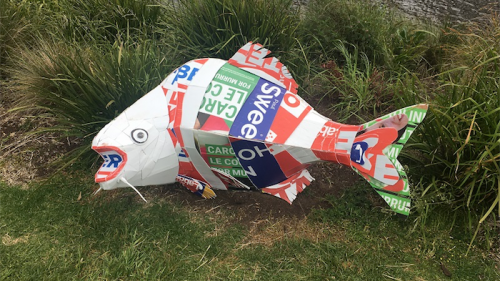 This is the perfect characterisation of what the infamous blight of Corflute signs grew to mean to Canberrans in the all-too-recent ACT elections.

Had the $5000 prize been awarded over the border, CC’s certain Tom would have been a dead-cert winner, despite Sian Watson’s pack of prowling dingo-type creatures taking the prize

Nothing to see here, it’s art
BUT Struggletown’s River Festival wasn’t without drama with plod being called after reports of a dead body on the riverbank.

It turned out to be Stephen Harrison’s coat-infused plaster, clothing and canvas print installation, titled “let us sit upon the ground and tell sad stories of the death of kings”.

The Canberra we love… only smoother. After and before pictures of the footpath in Yarralumla.

Smooth start to the electoral cycle
AS we prepare to savour the joy of Labor’s election promise of having the Canberra we love, only better, CC is duty bound to report that the patient burghers of Hampton Circuit in Yarralumla are off to a great start in the electoral cycle.

Regular readers will recall a recent photo and sniffy reportage of the state of the footpath there, possibly the city’s worst, which seemed at odds with Labor’s policy promise to make the city age friendly with smooth footpaths.

As if by magic, City Services has ironed the wrinkles from the pavement and there it is, a veritable vista of pavement perfection.

T-i-m-b-e-r! The bureaucracy acts
AND while on the subject of getting things done, there seems to be some progress since last week’s update on the tireless bureaucratic battle of pensioner John Wright, intimidated by a large, looming street tree and taunted by a stubborn directorate that wanted $6000 to take it away.

John reports getting a letter from City Services acting director-general Ben Ponton saying: “After reconsidering your situation and in light of the fact that the tree is not part of the formal streetscape, [we] will schedule the removal of the tree later this year or early 2017.”
“Your situation,” sniffs John, “Financial or that I have driven them to get rid of hearing from me? Who knows?” But a sensible solution all round. 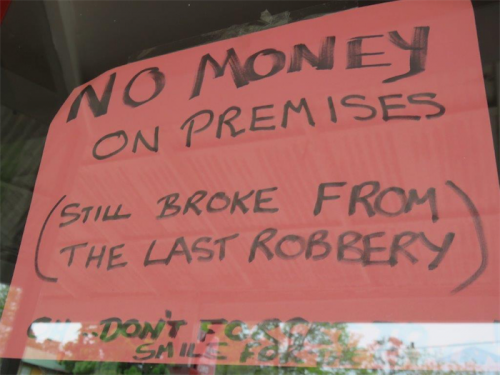 Sardonic sign spotted in the window of a Gunning shop by our wandering Watson snout.

CityNews - February 26, 2021
0
Almost 200 returning Australian citizens will fly into Canberra Airport on a government-facilitated flight from Singapore on Monday (March 1).