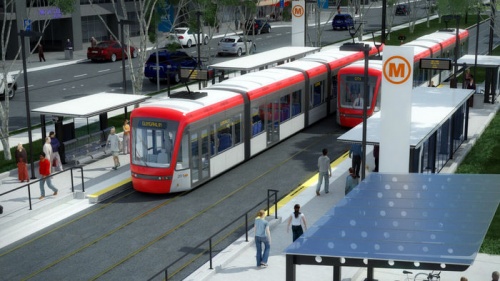 ANDREW Barr says a re-elected Labor government will start work immediately on stage two of our city-wide light rail network and encourage more people to use public transport with a free trial of all new Rapid Bus services.

“Almost 210,000 Canberrans will live, work or study within one kilometre of the Woden light rail corridor by 2041,” Andrew said.

“Planning for this growth will be vital to reducing congestion on our roads and providing commuters with a quick, practical and efficient alternative to driving their cars.

“Labor has already committed to take light rail to Woden via the Parliamentary Triangle and create a north-south spine for our public transport network. This will get light rail across the lake, and buses, bikes, walking routes and later stages of light rail will feed into this spine, making it even easier for Canberrans to get where they need to go.

“To support this city-building infrastructure, Labor will invest $25 million for scoping and design work to progress the project to the procurement stage. This important work will assist in understanding the stage two route alignment, develop the funding and financing model for the project, and determine the best procurement approach for the Territory.

“Light rail is an affordable infrastructure investment for the future of Canberra, and only Labor will deliver a city-wide light rail network. Light rail has been talked about for 100 years, and it’s now or never. It has to start somewhere, but under the Canberra Liberals, it never will.

“Before the 2012 election, ACT Labor committed to “plan, finance and develop the first stage of a Light Rail Network” with “construction estimated to commence in 2016”. We’re delivering on our promise with stage one now underway.

“Stage two will continue the renewal of Woden, where the town centre is already benefiting from recent upgrades and the ACT Government decision to relocate more than 1000 public servants to Woden at a time when the Federal Liberal Government has taken jobs out of Woden.

“Labor will also offer all passengers on our new Rapid Routes a free two-month trial of the service to encourage more people give public transport a go.

“The first new rapid buses to begin would be the Green Rapid from Woden to the City via Manuka and Barton, and the Black Rapid from Belconnen to Gungahlin. Passengers on these new routes will be able to ride for free for the first two months of service from mid-2017.

“In another reform to the bus network, Labor will also relaunch the Xpresso routes as ‘Peak Express’ services. On average these services carry around 13,000 passengers a week – 3.7 per cent of total bus patronage, but they could do better.

“A rebranding and marketing campaign will be undertaken to encourage more people to use these ‘Peak Express’ services, which are a great way to commute quickly to work every day.

“A new Peak Express service will be trialled from Gungahlin to Tuggeranong, offering three express non-stop morning and evening services between the two centres.

“While the Liberals are concreting the whole of Northbourne Avenue and turning it into an eight lane highway with massive bus bays that will replace footpaths, Labor has a real plan to improve our public transport system so it becomes more convenient, efficient, affordable and reliable – a genuine alternative to driving.”