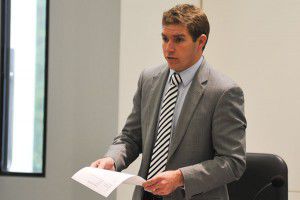 ALISTAIR Coe says a Canberra Liberals Government will duplicate William Slim Drive from Ginninderra Drive all the way to the Barton Highway.

“The Canberra Liberals will commit $39 million to ensure the nearly 3.5km stretch of road is fully duplicated as it often becomes a major bottleneck for motorists in Belconnen and Gungahlin during peak periods. We will plan to commence works in 2017-18,” Alistair said.

“The duplication of William Slim Drive will connect with our previously announced commitments of a fully duplicated Gundaroo Drive and Flyover at the current Barton Highway/Gundaroo Drive/William Slim roundabout.

“When completed, the three major improvements will properly cater for motorists in the rapidly growing Gungahlin region as well as western and northern Belconnen suburbs.

“Unlike ACT Labor, the Canberra Liberals have a comprehensive plan to fix the ACT’s roads. Under Labor, there has been lack of planning, which has been demonstrated by the issues with the GDE, Horse Park Drive, Gundaroo Drive and others.

“We believe in building effective roads, not a $14 billion tram network that will drive rates through the roof,” Mr Coe concluded.

CityNews - May 12, 2021
0
GWYN REES, well known in political and hospitality circles for his work with ClubsACT, was too young at 44 and too fit to have a heart attack. But he did and this is what happened…