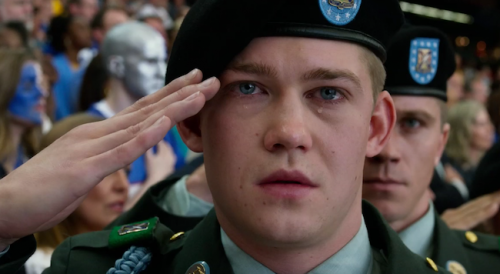 THIS clever, cynical, mordant, subtly iconoclastic and emotionally robust film has, in my opinion, the chops to bring a third Oscar to director Ang Lee and a first to writer Jean-Christophe Castelli (adapting producer Ben Fountain’s novel). And I deny all and any accusations that those five stars, the second time in as many weeks, constitute any kind of sycophancy.

Impacting the senses long after you leave the cinema, the screenplay works on two levels. The story is straight-forward enough. Nineteen-year-old Billy (promising newcomer Joe Alwyn) has received the Silver Star for trying to rescue his wounded infantry section leader Shroom (Vin Diesel) under enemy fire in a skirmish in Iraq. Back in Texas on Grand Final day, Billy and the rest of the section are guests of the stadium owner (Steve Martin) seeking to bask in the glow of his heroism and patriotism by appearing in the halftime entertainment arranged to keep the crowd’s boredom at bay.

A Hollywood producer has sent his man to try to persuade the soldiers to agree to appear in a movie of the skirmish. Cheerleader Faisan (Makenzie Leigh) whisks Billy backstage to exchange virginities.

There’s more to Billy’s film than merely those narrative events. Lee and Castelli take a jaundiced look at American cultural values and embedded their grossest, most selfish, least attractive, most unfortunate elements in what you see but leave it to you to venture behind events and discover what, while not overt, drives a character’s response to a situation. That’s not compulsory but it has a pervasive ability to influence your inner reflections on what you’ve just seen and wonder why a particular moment is so.

I wonder what Australian troops think of Hollywood’s habit of laying down heavy fire for the sake of visual and aural effects. I’ve never been in harm’s way, but as a recruit doing national service, I learned a basic rule – know your target. Ang Lee certainly does.

At Capitol 6 and Hoyts