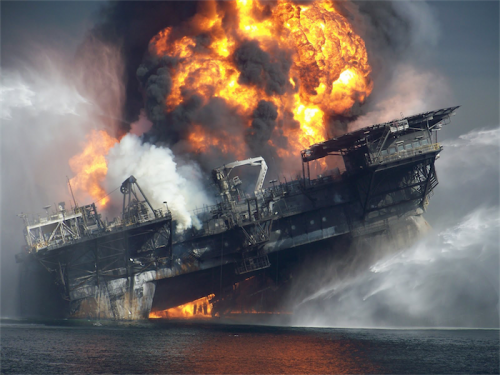 WIKIPEDIA describes disasters as “the consequence of inappropriately managed risk… the product of a combination of both hazards and vulnerability”.

And don’t filmmakers adore them! What distinguishes “Deepwater Horizon” from the majority of Wikipedia’s very long list of so-called disaster movies is its claim to authenticity as it invites us to get involved from our safe cinema seats.

Matthew Michael Carnahan and Michael Sand had plenty of detailed forensic evidence and personal accounts to draw from when writing the screenplay for Peter Berg’s film telling about the morning of April 20, 2010, in the Gulf of Mexico. That’s when “Deepwater Horizon”, BP’s enormous semi-submersible drilling platform exploring the Macondo prospect blew out, caught fire, killed 11 workers, released oil and gas estimated to total 4.9 million barrels into the sea and atmosphere, rendered the environment fatally toxic to birds and aquatic life and deprived local fishermen of their livelihoods.

The screenplay’s narrative underpinnings begin with Felicia Williams (Kate Hudson) issuing an unrefusable early morning invitation to husband Mike (Mark Wahlberg), the rig’s chief electrical engineer, before he pulls on his workaday trousers and leaves to board the helocopter for the flight to the rig. There, Jimmy Harrell (Kurt Russell) operational supervisor for the drilling company and Vidrine (John Malkovich) BP’s representative on the platform, disagree about the best response to unexpected telemetry from the drill pipe. When she blows, images of the ensuing fire generate credible tension even though we already know the story’s outcome and how long it will take before the hole in the seabed gets capped (87 days on which TV news reports heart-breaking consequences for wildlife.)

The fire sequences are a tribute to the compilers of the CG code that reaches the screen as the platform furiously ablaze, which some may feel gets more screen time than necessary. No matter. Our awareness of the verity of the story’s origins reinforces the terrors and dangers of those minutes in a way that the contrivance of fictional disaster movies simply cannot equal.

0
On learning that the running time for "Waves", a film about an African-American family, is 135 minutes, you might be forgiven for approaching it with reservations and a little caution. Don’t do that, advises reviewer DOUGAL MACDONALD.