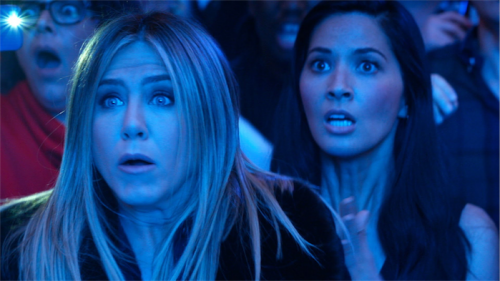 IT took three writers to concoct the story that co-directors Josh Gordon and Will Speck manufactured into this movie using a screenplay by three more writers.

A camel is a horse designed by a committee. Go figure! Many films need only one writer for success.

The plot for this camel evolves from Mr Vanstone having bequeathed his IT company to daughter Carol (Jennifer Aniston) and its Chicago branch to son Clay (TJ Miller) in whose office the urn containing his ashes now reposes.

Carol is one tough businesswoman, committed to the firm. Playboy Clay depends on his buddy Josh (Jason Bateman) to run the Chicago branch, which by performing financially below Carol’s expectations provides her with reason to dismiss 20 per cent of the staff. And Christmas is coming.

The branch needs a big success to persuade Carol that it can deliver the goods.

Walter Davis (Courtney B Vance) who needs an IT supplier to come on board his new venture, has already chosen a competitor. Clay and Josh need to persuade Walter to change his mind, Carol to change her decision and the cloud of dismissal hanging over as-yet-unselected employees to lift beneath the sunshine of a big sale.

Still with me? At least 20 minutes into the film and the word “party” not yet having been spoken? Carol’s booked to fly to London that evening, leaving the boys free to throw a giant hoolie at which to persuade Walter to change his mind.

They don’t call Chicago the windy city without good reason. Stay with me, reader. This meteorological complication will become important in due course.

Carol’s flight leaves late that afternoon. And it’s mid-winter. Until then, on your behalf, I sat through about half the film’s 105-minute length watching sanity fly away as employees, friends, old Uncle Tom Cobley and all partied on at company expense.

To discern a purpose for all that misbehavioural malarkey, filmgoers will need to engage their brains in low gear while the film drags them through a bog of raucous tomfoolery in pursuit of the outcome that it has been promising since it started. Its energy investment in evanescent high jinks rather overwhelms its occasional statements about business, moral and emotional values. If it made any kind of sense, it might have justified its DreamWorks logo. But it’s really not all that funny despite some admirable supporting performances. And it says nothing about what Christmas should really be reminding us.

At Hoyts and Palace Electric

CityNews - July 4, 2020
0
POLICE, fire and ambulance resources were called to a house fire in Page this morning