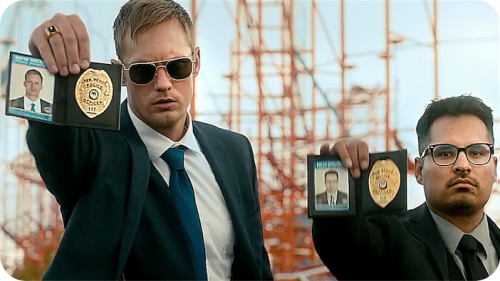 SOME call it the script. Others call it the screenplay. By whatever name, it’s the collection of a writer’s instructions about creating moving images for us to watch in a darkened room. Others may change the script as the enterprise progresses but if the instructions aren’t right, the film probably won’t be either.

Preceding the words sits the writer’s brain. Watching the result of the outpourings from John Michael McDonagh’s brain that constitute “War On Everyone”, my constant thought was, what the heck is this writer/director trying to tell us.

In Albuquerque, police detectives Hispanic Bob (Michael Pena) and Anglo Terry (Alexander Skarsgard) are a law unto themselves. They take no prisoners, brook no interference with their unorthodox methodology. Petty crims get released after a thumping. Bad crims are at risk of never coming before a judge. Bringing a corpse before the court is pointless.

One of their favourite villains is Padraic (David Wilmot) whom they’re using as a snitch in their current major case involving a Brit (Theo James) whose higher than justifiable opinion of self exceeds reality. Big money’s involved. The boys’ jobs are on the line at headquarters.

These elements and their sub-plots need competent writing. And that’s what “War On Everything” doesn’t have. Too overtly simplistic to be a message movie, it nevertheless conveys a notion of straining to say something worth hearing but never quite succeeding. Violent, cruel, obscene, comical, poignant and many other elements, it just doesn’t work.

CityNews - April 6, 2020
0
What if I can't pay my rent? MARK GIANCASPRO and DAVID BROWN explain the options for rent relief in Australia.