THE final countdown is beginning until the closure of Teatro Vivaldi and the ANU Arts Centre, soon to be demolished as part of the university’s development plans. 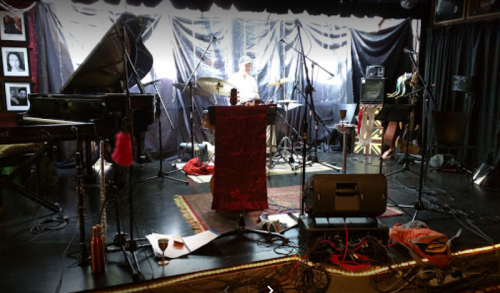 Emails have been pouring in from punters who attended the interval production of Stephen Sondheim’s “Into the Woods” last week and now one of the Canberra Theatre scene’s true stayers, former Ethel Tory head of drama at the ANU, Tony Turner, is whizzing up a bit of Noel Coward as his way of saying goodbye.

The short plays “Mild Oates” and “Weatherwise”, were written by Coward in 1922 and 1923, both part of an early revue called “London Calling”.

Teatro Vivaldi and Coward, we have discovered have been connected for a long time. The restaurant’s owners, Mark Santos and Anthony Hill, previously ran the Noel Coward Hotel in Elbury Street, just behind Selfridges in London’s Oxford Street, in a house where Coward had lived for some time.

Then when Santos and Hill began dinner and show packages some 14 years ago at Vivaldi, Coward’s performances were heavily featured.

As part of the last hurrah, the swansong, the Long Goodbye – metaphors abound – Papermoon and Vivaldi productions will present the double bill, directed by Turner, designed by Ian Croker and costumed by Oscar nominee Anna Senior.

“Mild Oats”, penned when the author was only 23 and here adapted for the stage raises themes that would later be developed in his more famous plays, films and songs. Henry Strand (as He) and Alessa Kron (as She) show skill by playing two complete strangers who have defied the conventions of society by casually picking each other up and returning to “He’s” apartment.

Meantime, normally irrepressible George Huitker has written to “CityNews” about his own Vivaldi’s “au revoir” show “Burning down the House” saying: “Rest in Peace Vivaldi’s… You’ll remain strong in our memories… You will always be deeply and genuinely missed in a way concrete edifices are not… You will stay flowing in the Sullivan’s Creek of the soul.”

George Huitker and his band Junk Sculpture, Teatro Vivaldi, Saturdays, May 20 and June 3.

CityNews - February 26, 2020
0
Author Allan Hawke outside his forebears' Blundell's Cottage down by Lake Burley Griffin… “Family histories are incredible things to do, you just have to be prepared for the secrets you will uncover.”