“Salt Bridge has been shot entirely in picturesque locations in and around Canberra barring a few pick-up shots in Sydney,” Deonath tells us, adding that that since the director, producer, cinematographer, art director, sound, music, make-up artist, editor, post-production crew, and most of the supporting cast are from Canberra, “It is a Canberra movie in the true sense.” 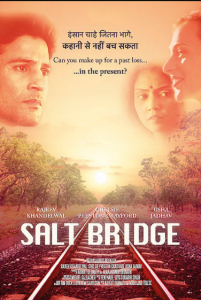 Deonath, who moved to Australia from India 15 years ago, wrote and directed “Salt Bridge”, which tells the story of Basant, an Indian migrant who arrives in Australia and meets a western woman.

Astonishingly, he managed to get Bollywood star Rajeev Khandelwal to play the main character and Logie-winning actress Chelsie Preston Crayford, seen most recently in ABC drama, “The Code”, as the love interest.

Even more astonishingly, seven of Deonath’s own original songs were listed as eligible in the Original Song category for last year’s 88th Academy Awards – more than any other film in the line-up.

Canberra itself is a star act in this movie, ripe for Bollywood utilisation of its unique pictorial possibilities. There are drone shots over Tidbinbilla Road, Tidbinbilla Nature Reserve and Black Mountain Peninsula. The National Arboretum and Canberra Railway Station make appearances, as do Telopea Park, Lake Burley Griffin, a Murrumbateman winery and even Queanbeyan Golf Club.

With most of the dialogue in Hindi, Deonath has naturally aimed “Salt Bridge” at the Indian market but he is particularly excited to have achieved a cinema release in Australia.

“Salt Bridge”, at Event Cinemas Manuka, July 27 for one week. Bookings to eventcinemas.com.au/Cinema/Manuka

Review - August 6, 2020
0
If there’s ever a time where a good laugh is needed, this is it. Karen Vickery’s fine production of this very funny and life-affirming play provides comedy and drama equally, writes theatre reviewer LEN POWER about "Brighton Beach Memoirs".