THERE’S nothing quite like fruit off your own trees and the next couple of months will be the busiest time of the year for planting fruit and ornamental trees and roses.

Before even thinking about planting your first tree or rose, consider the soil itself, which in older suburbs may have had the advantage of being improved over the years dealing with clay, the predominant soil in Canberra.

Start by digging a couple of holes to check the nature of the soil. If it is clay the simplest way is to apply “Multicrop” Liquid Ground Breaker. Unlike gypsum, which is usually promoted to “break down” clay, the liquid clay breaker soaks deep down and sideways into the soil.

If you are considering clearing the whole block, I’d recommend applying the liquid ground breaker over the whole area. But if you are just planting in the existing garden, go ahead and dig the hole for your trees and fill it with the liquid ground breaker and allow it to soak away. You’ll know almost immediately the condition of the soil by the rate the clay breaker soaks away. If it drains in a few hours or less the soil is pretty good. But, don’t be in a hurry; even if it takes a couple of days, it’s doing its job.

If planting roses where there were roses previously, always plant them in new soil.

Next, think carefully about the ultimate size of any new tree, check its label at the nursery or on the internet, but be aware that the information is not always for Australia and can often refer to overseas, especially nurseries in the US.

It’s vital to take into account all services – gas, water, sewer lines, and in the newer suburbs underground electric cables and phone cables. If you are not sure call Dial Before you Dig on 1100.

In the older suburbs, the electricity lines from the power poles to the home are overhead and all tree branches need to be at least 1.5m clear of the lines. If, for example, the tree is four to five metres tall, I’d recommend planting at least the same distance from the home or outbuildings. 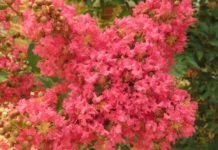 Time to give hellebores the ‘Chelsea chop’