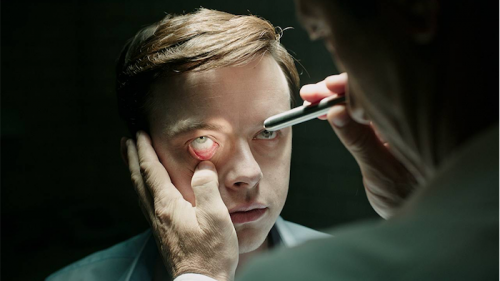 IF you’re feeling more well than you wish to be, the cure is simple. Stop living!

Director Gore Verbinski and writer Justin Haythe visit the gothic horror film genre with this 146-minute stay in a sanatorium at the top of a Swiss mountain (actually, long-abandoned Castle Hohenzollern at Baden-Württemberg, Germany, also the location for Stanley Kubrick’s “Barry Lyndon”).

Pembroke is in the institute run by Volmer (Jason Isaacs). One look at Volmer and you quickly realise that his handsome, smiling face conceals something sinister.

Volmer tells Lockhart that Pembroke is a patient and cannot travel. Lockhart leaves to catch his return flight. Halfway along the spectacular road down the mountain, a stag crashes the car in as spectacular an example of its kind as you might ever see. Lockhart wakes with his leg in plaster and an abjuration from the oh-so-caring Volmer to drink plenty of water.

By this point and Lockhart’s meetings with other patients who have no wish to leave the sanatorium, we know that something’s very wrong. Teenaged Hannah (Mia Goth) wanders barefoot around the place. Eels form an important component of the film’s horror budget. Lockhart’s treatment includes immersion in a tank filled with them. And drink lots of water.

The screenplay is packed with improbabilities, which is okay provided their credibility is, well, credible. Lockhart is a bunny and fall guy with no concern for his own welfare.

At Dendy, Capitol 6 and Hoyts