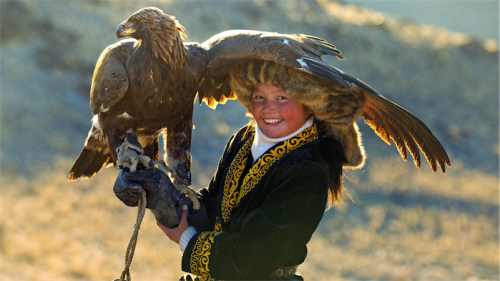 INFORMATION about Otto Bell, the US-based, British-born producer/director of this quite delicious documentary, isn’t easy to find. In 2004 Cambridge awarded him an MA. And he is reported as having spent his $US80,000 life savings to make this film.

Thirteen-year-old Aisholpan lives in western Mongolia with her nomadic family. For 12 generations, her family’s men have used eagles to hunt for food and fur in the Altai Mountains. Aisholpan wants to have her own eagle and train it to hunt.

First catch your eaglet. Aisholpan and her father Rys ride shaggy, tough, little Mongolian ponies into the foothills to catch an eaglet during the brief period between when its parents no longer feed it but it’s not yet strong enough to fly.

Rys ties a rope around Aisholpan’s waist and lowers her down a sheer rock face while she robs the nest. DP Simon Niblett’s cinematography during this long sequence is a reminder that, whenever someone comes into shot after a difficult climb, the cinematographer got there first! However, close-ups indicate that Aisholpan necessarily wore a camera.

Aisholpan and her eagle annoy die-hard male traditionalists by taking first prize at a field day. Then she and Rys ride into those precipitous snow-covered mountains to find and catch a fox. These passages provide a wondrous mix of visual beauty and elemental survival. It’s hard country for any living thing. The fox isn’t going to go down without a fight. The eagle hasn’t killed before. Watching it happen is exciting.

And Aisholpan? She’s a sweet-faced youngster, brave, determined and womanly aware. She doesn’t say much, she smiles a lot and sends us out with a warm sense of optimism.

CityNews - September 16, 2020
0
THE identity of a body found at Isaacs Ridge on last Tuesday (September 8) has been confirmed as that of missing Canberra teenager Rooney Mawa.