GREEN, green and more green, Joan O’Loughlin’s pretty cottage garden is abundant with foliage, including several varieties of weeds, which she admits she has a relaxed attitude towards.

“There’s ivy, which I’ve always loved anyway, clover, lilies and some plants here that are just a bit weedy. I’ve learnt to love them,” she says.

The shady Fadden garden will be open to the public on the weekend of March 2-3 through Open Gardens Canberra.

The back lawn is framed by overflowing beds creating shade and privacy, with a touch of pink and blue flowers among the green including salvias (which the bees love), crepe myrtle, aquilegia, hellebores, Japanese maple, irises, Korean spruce and bulbs in spring.

“Autumn is so colourful here, with the creepers, ornamental cherry and maples, and every spring is a revelation,” Joan says.

“I often have no idea what’s going to come up and that’s what I like about it. It’s always a surprise.”

There’s a love of art here, too, with mosaics created by Merryl Bradley, who will be offering mosaic demonstrations on the open weekend.

Joan says she can often be found pottering outside in her nightie of a morning, spending hours a day in the garden. Her main loves are pruning and composting, with four closed bins, a worm farm and the “heap” hidden behind the garden shed, comprising bales of pea straw that form a compost enclosure.

“The garden is what it is thanks to pruning and composting,” she says.

“I think the plants look so lovely after a prune. I do the garden myself and I love being outside, there’s always something to do.”

Around the side of the house is a fern garden and a small pond, shaded by creepers and trees creating a haven of shade, which Joan says is one of her favourite spots because it’s so small and intimate.

Pot plants and hanging baskets surround the house, filled with gardenias, begonias, orchids, fuchsia and citrus, and Joan says she’ll happily salvage any seedlings that grow in cracks between the pavers.

“It’s not a designed garden and I very much go with the flow,” she says.

“I’ve edged the beds in brick so I can easily change their shape if I want to. It’s not an ordered garden by any means, and I’m not the tidiest!

“It’s what your heart tells you to do. It just turns out as it turns out.” 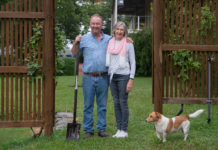