Seven Days columnist MIKE WELSH shares a big week in Canberra topped by the Raiders heading off to the NRL Grand Final.

STAFF at the Jerseys Megastore in Fyshwick were seeing all shades green long before the Viking Clap was officially Sydney bound.

The store had been invaded by Raiders’ fans desperate to update their Green-Machine wardrobe.

One staffer predicted: “You won’t be able to move in here if they win.” Asked the most popular item of merch, the staff member was unambiguous: “If it’s green, they’re buying it”.

Despite a mass of green at GIO Stadium for the qualifier, there was a sprinkling of the famed Rabbitohs’ cardinal red and myrtle green strip.

A CANBERRA school’s Viking Clap has gone viral. Such was the enthusiasm and skill of students at Amaroo’s Good Shepherd Primary that within an hour of footage being uploaded on the school’s Facebook page media requests began to flow in. Ninemsn, the “Sydney Morning Herald” and “The Australian” were all keen to cover the Catholic school’s clap.

STILL on non-local broadcasters, a petition is circulating to have advertising featuring Alan Jones’ syndicated 2CC breakfast program taken from the back of Action buses. Sponsor of the petition, president of Canberra Women in Business Peta Swarbrick, says on the group’s Facebook page: “Many people feel Alan Jones is not a fit person to grace our public transport, given his acknowledged anti-social and offensive comments that have habitually targeted women, including Prime Minister Julia Gillard, with disrespect and even violence”. 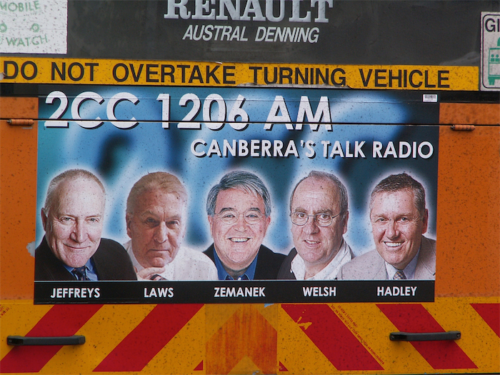 MODESTY prevents me from expanding on a time when only the finest of broadcasters with the highest of standards (and heads resembling the backs of buses), were routinely featured on the back of Action buses.

A CANBERRA medico has used unusual language in promoting the case for pill testing at music festivals. Calvary Emergency consultant Dr David Caldicott, a part of a pill testing trial at April’s Groovin’ the Moo festival, says the trial’s success came from the aim of “creating a death-free festival instead of a drug-free festival” and, as a doctor, his job was to ensure people “could get home to their mummies and daddies”.

IN another softly softly approach to law and order, ACT police have issued a gentle reminder to the entitled and impatient bullies who regard public roads as their own domain. Using social media to respond to stats that of the 4854 collisions from January to August almost 50 per cent were rear-end collisions, police tweeted: “We’ve said this before and we’ll say it again… your car is NOT meant to touch another car! Be patient, focus on the road and leave enough space between you and the car in front”. I’ve said it before and I’ll say it again; tailgating is a dangerous, anti social and intimidating practice.

IT’S still unclear if new laws in the ACT recognising animals as sentient beings (one who perceives and responds to sensations of whatever kind – sight, hearing, touch, taste or smell), extend to animals’ self esteem and cover slut shaming. A dog lover giving a dachshund a random belly scratch at Manuka was shocked after suggesting to the dog’s owner that it seemed to appreciate attention. The owner dismissively said: “Oh, he’s a slut whore bag.”

CityNews - August 5, 2020
1
A healthcare worker at Canberra Hospital is frustrated after she had her car keyed while on night shift.