Gardening columnist CEDRIC BRYANT sings the praises of the dogwood.

AT this time of the year our dogwood, or Cornus, is beloved by birds for its strawberry-like fruit.

Cornus capitata is a large family native to the Himalayas and China, introduced to the west in 1825. It’s a small, extremely hardy evergreen tree that grows well here.

This dogwood was given the Award of Merit by the Royal Horticultural Society for its flowers in 1922 and its fruit in 1974. Always a guarantee of a great plant and especially for excellence as an exhibition plant (garden show entries, please note). The lemon-yellow flower bracts in summer gradually change from a light and then deep pink in large clusters over the whole tree. Now, the strawberry-like fruit gradually changes from green to red at this time. Our specimen was planted more than 10 years ago and is now a manageable size of 4m high x 2m wide.

The deciduous Cornus florida is renowned for its mass of pink bracts from spring to summer. This is a small deciduous tree and can suffer from drought conditions. I’ve seen the demise of numerous specimens, although I suspect from lack of regular watering.

I CONTINUALLY marvel at one climber in our garden, Lapageria rosea var. albiflora “White Cloud”, which is the national flower of Chile; also known as the Chilean bellflower. As it prefers shade to semi-shade, ours is growing on a lattice under overhanging branches of a silver birch. Recognised as one of the most beautiful of all climbing plants, with its pure white tubular flowers 10cm long, it was introduced to the west in 1847 and quickly became a favourite conservatory plant in the UK. Despite the severity of this summer, it has flowered better than ever. Clusters of flowers first appear in late spring, then it rests, followed by flowers in summer and more now, in autumn.

WE’RE fortunate with the great variety of fruit available today. But, going back to the 1600s there was an even greater variety of fruit available than now. Classed then as exotic fruit, there were 53 varieties of peaches and nectarines, 33 plums and 13 different apricots grown. These were mainly grown on the estates of large country houses with tall brick-walled fruit and vegetable gardens. The fruit was espaliered on the walls for the reflected heat in summer, for example in Henry VIII’s royal kitchen garden at Hampton Court Palace in London. For more details visit hrp.org.uk.

OUR Michaelmas daisies are flowering now, the best they’ve been for 10 years, and are abuzz with bees. When they’ve finished flowering, I’ll divide them to fill in bare spots where some less sturdy plants succumbed to the summer heat. Almost a lookalike is the native Swan River daisy, brachyscome, and one of the best is B. “Magenta Blue”. A perfect spreading ground cover now in flower, this can be seen growing at the Botanic Gardens. In the cooler weather, it’s the ideal time to walk through and see the many autumn flowering plants there. I’d recommend picking up the “Flowers, Fruit and Foliage” guide at the Visitors’ Centre first.

THE Belconnen Garden Club had a recent visit to the Cool Country Natives nursery in Pialligo. Members were staggered at the range of plants available, at what is now the only specialist native plant nursery in Canberra. We were able to go behind the scenes to the propagation areas, to see thousands of seedlings growing in tunnel houses. This means they’re acclimatised to our climate from day one. 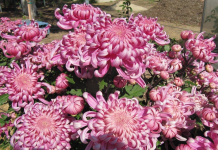 Andrew Mathieson - May 14, 2021
1
An athletics field that produced a two-time national champion and dual Olympian along with a range of local sporting heroes could be bulldozed for a car park after a service club proposal under government planning consideration.