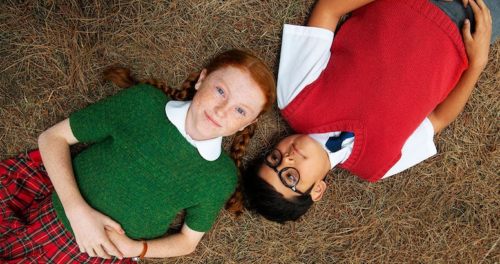 IN 2013, Australian Barry Jonsberg published a book called “My Life as an Alphabet” about 13-year-old Candice. It’s become the basis of the feature-film debuts of director John Sheedy and writer Lisa Hoppe and I’m bound to tell you that they’ve done their jobs quite creditably.

Candice (a convincing performance from Daisy Axon) is precociously bright but non-conformist, which puts her outside the group of prettier, frivolous girls in Miss Bamford’s (Miriam Margolyes) class.

She is impatient for her breasts to develop. Her home life is uncomfortable. Father Jim (Richard Roxburgh) and Rich Uncle Brian (Joel Jackson) were once partners in a successful IT company that has been taken over. A financial disagreement has caused Jim to shun Rich Uncle Brian, which has driven mother Claire (Emma Booth) into an ongoing megrim needing regular medication.

A new boy arrives in the class. Douglas (Wesley Patten) is convinced that he can travel to another dimension in time, which catches Candice’s interest but seems not to worry his single mum Penelope (Deborah Mailman). He and Candice become an item. They may have heard about more grown-up behaviours but neither understands what those mean.

Miss Bamford is preparing the class for a class performance in which each student creates and performs a segment about a word beginning with a particular letter. That becomes the film’s climax. But getting there is its meat.

“H Is For Happiness” may be billed as a comedy (and it does indeed have a good sprinkling of humour) but beneath its surface there’s some serious stuff that adults understand because of having survived it. It’s called early adolescence and the film’s treatment of it is sympathetic but not condescending, frank but restrained about the physical elements.

I found myself drawn by the film’s appearance (shot in and around Albany in WA) and a growing sense of how mawkishly it could have been in different (aka Hollywood) hands. The cast is top quality. Its arrival with little or no warning was an agreeable surprise.

At Dendy, Hoyts Belconnen and Limelight

Sponsored Content - September 17, 2020
0
In this sponsored post, “CityNews” speaks with a range of experts, all passionate about sharing their skills and services with the ACT region.

Election 2020 / Not much rocking the Kurrajong boat