Building safety, hail storms and walks around rustic Reid. Another “Seven Days” of the big stories with IAN MEIKLE.

DESPITE all her threats and sabre rattling, one wonders if the builders of Canberra are having a lend of WorkSafe ACT commissioner Jacqueline Agius.

Relatively new to the job and talking tough from day one, her inspectors pounced for the third time in just over a month this past week issuing fines at an undeveloped residential construction site after discovering “alarming” safety breaches.

The week before they swooped on 18 residential construction sites in Throsby, issuing 12 prohibition notices, 42 improvement notices and four infringement notices worth more than $11,000 in their wake.

Has the industry forgotten the two workers who died on separate construction sites on Denman Prospect earlier this year? Is no one listening to her or is getting caught dodging safety just a cost of doing business?

FIFTEEN minutes of hail in January cost the ACT taxpayer more than $507,000 in government rebates to owners of the 44,500 vehicles damaged in the freak storm.

But now the work of the Hail Assistance and Innovation Liaison (HAIL, geddit?) team is now complete, having processed more than 7606 rebates, which helped to reduce fees associated with inspecting damaged vehicles and registering replacements.

IS Reid the suburb Geocon forgot? The inner-inner-north suburb nestles up against Civic unblighted and bookended by the towers that are consuming Campbell and Braddon.

The locals have much to be grateful for and on Sunday, November 22, the Reid Residents’ Association is conducting a “Walk Around Reid” to showcase its history, architecture and residents.

Reid is one of Canberra’s oldest suburbs and its largest heritage housing precinct. Named after Sir George Houstoun Reid, Australia’s fourth prime minister, it was gazetted as a suburb on September 20, 1928. Much of its construction occurred before then in 1926 and 1927.

Reid was designed to house middle-level public servants, Ainslie those who could afford slightly less and Forrest for those who were more senior.

The walk begins from the Reid Tennis Club at 2pm and costs $10. Book via email at info@ reid.northcanberra.org.au

OUR media colleague Amanda Whitley has had enormous acclaim and success as the founder of the HerCanberra website and, along the way, earned accolades such as ACT Woman of the Year in 2016.

Her visionary work is much admired, but as she tells the University of Canberra’s “Uncover” magazine, everything was going swimmingly until covid struck earlier this year and the local media landscape started heading south – the most obvious manifestations of that were “The Chronicle” being put to sleep and “The Canberra Times” printing going out of town. We at “CityNews” had our hearts in our mouths for months.

To help weather the downturn, Amanda has bravely stepped back from the day-to-day running to take up the role of deputy information co-ordinator for the ACT government’s COVID-19 response.

She says the decision to work outside HerCanberra ensures the survival of the business.

“I feel incredibly fortunate that I have been given an opportunity to step into an important role which allows me to give back to my community in a different way, while relieving financial pressure on the business and also giving the HerCanberra team a chance to put their own stamp on the brand,” she says.

AT just-turned-80, the irrepressible Canberra theatre promoter Coralie Wood has scored her own weekly radio program – “funny things that happen backstage during rehearsals and beyond” – on ArtSound Radio, Thursdays at 12.30pm.

“It will be a segment with titbits about theatre shows coming up, theatre gossip and some interviews that relate to all of these things with the main aim of fun!” Coralie promises. 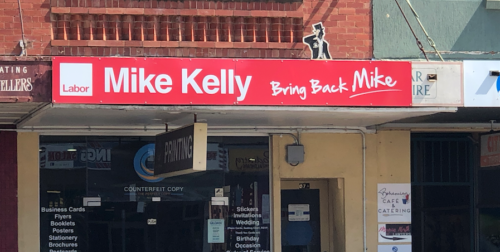 GONE, but not, it seems, forgotten. A few doors down from the member for Eden Monaro Kristy McBain’s Queanbeyan office is a lingering facade from retired member Mike Kelly’s wilderness days, extolling passers-by to bring him back to parliament, which they did until he didn’t earlier this year.

I HEAR Canberra Airport is being invited, among others, to pitch for hosting the Jetstar HQ as owner Qantas reviews its national airport partnerships ahead of the “new normal”.

Ian Meikle is the editor of “CityNews” and can be heard on 2CC’s “CityNews Sunday Roast”, weekly, 9am-noon.

CityNews - April 6, 2021
0
Evoenergy is proposing a "substantial increase" to electricity prices in the ACT during the 2021-22 financial year, blaming the suggested jump on ACT government renewable policies and taxes.

Bell prepares to bare his soul