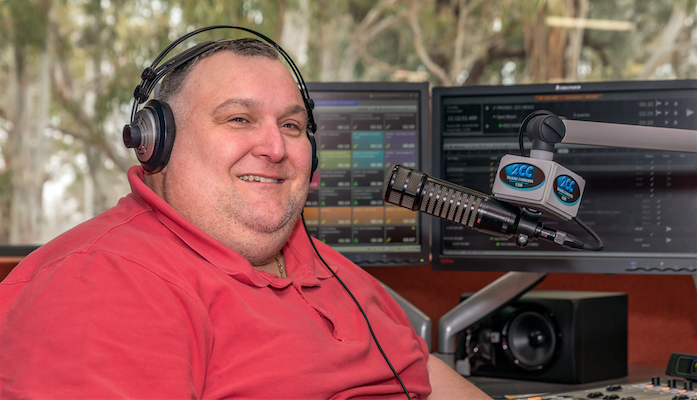 THE stars have aligned for radio announcer Stephen Cenatiempo, who’s back behind the mic and hosting 2CC’s new local breakfast show.

Made redundant from Southern Cross Austereo in December after two years hosting Triple M’s “Australia by Night” program, Stephen, 46, says that after things went “belly up” there, it only got worse in the wake of COVID-19.

“It was tough for a few months, then Alan Jones retired and a few other dominoes fell into place and here I am,” he says.

The nature of working in radio is to move around, Stephen says, and he’s had two years in Coffs Harbour as an afternoon announcer, five years presenting the Hunter Valley Today morning show on 2NM in Muswellbrook and two years in Newcastle with SCA.

“It suits me, I’m single and in this business, it’s accepting that we’ll be going far from home, you might eventually end up at home or home might become somewhere else.

“I’ve always liked Canberra. I’m a Sydney boy originally so I like the hustle and bustle of the city, but when you’ve been living in the bush for the better part of 10 years, Canberra is a good hybrid. And it’s not as cold as they make it out to be.”

As an out-of-towner landing in Canberra in the run up to the ACT election, Stephen says he’s keen to talk to the main players but wants to keep the program for the people listening.

“I specifically decided when I came here that this show was going to be for Canberrans outside the bubble, so we’ll talk politics but only as far as it affects people’s lives,” he says.

“As someone that’s spent a lot of time in the back rooms of politics I know the spin before it happens. A lot of other announcers berate politicians and think it’s going to achieve something. I know it’s not, because their egos are as big as mine, but I’ll make it clear if they refuse to answer a question.”

A former auctioneer and construction administrator, Stephen says he always wanted to get into radio but didn’t know how to break into the industry.

“I started doing a weekly radio show with a mate of mine in a tin shed out the back of Marrickville in Sydney – we had a lot of fun, learned a lot of bad habits,” he says.

A chance meeting with Murray Wilton, who was the nighttime announcer at 2GB, and saying to him: “I want to do what you do, how do I do that?” led Stephen to study radio at AFTRS (Australian Film Television and Radio School) in Sydney, where in a moment of “just serendipitous synchronicity” he became a mentee of then-AFTRS director of radio Mark Collier, who had worked at 2CC many years ago, and had given Ray Hadley and Alan Jones their first jobs.

“I had some great guidance from Mark from a talk radio perspective, and got my first gig at 2HC in Coffs before I graduated in 2010,” Stephen says.

Since then, he’s won nine ACRAs (Australian Commercial Radio Awards), as well as being nominated for lots he didn’t get, he says.

“I’m coming up to 10 years in the industry and I’ve won nine awards, so I’m quite happy they’re skipping the awards this year so my streak stays alive,” he jokes.

“The awards are a lovely acknowledgement as they’re voted on by industry heavyweights, so it’s good to know that from a craft perspective I’m doing the right thing.”

But it’s the listeners that matter, he says, and with a love of telling stories and talking to people, he’s got a passion for talk radio.

“Announcing is better than a real job,” he jokes.

“I can be a bit of a loner, but I’m a people person at heart and like to socialise and learn about things.

“I aim to never be like anyone else. I don’t know how to be anyone else. I am who I am. Some people think I’m obnoxious, some think I’m friendly, I get angry sometimes, I get passionate about things, I laugh, I cry. You get what you see, and if you don’t like it, bad luck.”

Stephen Cenatiempo can be heard on 2CC, 5.30am-9am, weekdays.

CityNews - September 21, 2020
0
An SUV was seen erratically driving through Civic, Belconnen and Gungahlin before it rammed into a police vehicle in Reid this morning (September 21).