“A prickly, feisty person and a fine journalist who was never afraid to speak truth to power and call things as she saw them.” Peer praise doesn’t get much better as journalists remember a special writer. It’s “Seven Days” with IAN MEIKLE.

JOURNALIST Rosslyn Beeby’s body was formally identified at the Phillip mortuary this past week. It was a lonely, Eleanor Rigby moment.

The reclusive former reporter, ill with gastric flu, had fallen and died suddenly and alone at her riverside Queanbeyan home. Death from “unknown natural causes”, the coroner’s certificate plaintively records.

Neighbours noticed she hadn’t been seen and one of her cats was pacing in agitation. They called the police who broke in and found her. She’d been dead for anywhere up to a week.

Trying to track down someone to confirm her identity and, in the absence of any family, police put the confronting task to her friend of 18 years, “CityNews” arts editor Helen Musa.

I never met Rosslyn, but I knew her huge reputation as the distinguished and respected science and environment writer for “The Canberra Times” and have felt fraternally moved by the sad passing of a fellow journalist.

A former arts reporter at the Melbourne “Age” and a Radio Australia journalist, she was responsible for breaking many local and national stories and, in 2009, was awarded a Jefferson Fellowship by the US Congress-funded East-West Center to study US climate change initiatives.

I also knew, through Helen, she’d said some kind things about “CityNews” and, over the years, given us leads to stories.

The leads came after Beeby was catapulted, voluntarily redundant, from the “Canberra Times” on July 20, 2012, with unseemly speed and no formal farewell from management after almost nine years of service.

It took until this past week for the paper to finally get around to farewelling her unwanted talents… with an obituary.

Fellow redundee and former features editor Gillian Lord fondly Facebooked that “Rosslyn was a prickly, feisty person and a fine journalist who was never afraid to speak truth to power and call things as she saw them.

“She was a beautiful writer with an incisive mind and an assiduous researcher. Having worked with her for more than a decade, I remain in awe of her gift for crafting a well-constructed story with grace and elegance, and her lovely turn of phrase.”

Born in Gippsland, Victoria, in 1952, she graduated in arts from Monash University in the 1980s before joining “The Age” as an arts reporter. She moved to the Blue Mountains working at Radio Australia, World Wildlife Fund, then on to Canberra.

After leaving the “Times”, she took a job as Australia-NZ editor with the London-based global research think tank Research Professional News, from which she had only retired before Christmas.

“She was a fearsome, often uncompromising, advocate for wildlife, especially kangaroos and koalas, and had a huge network of friends and colleagues in the ecological community,” Helen Musa recalls.

“But she had become increasingly reclusive.” 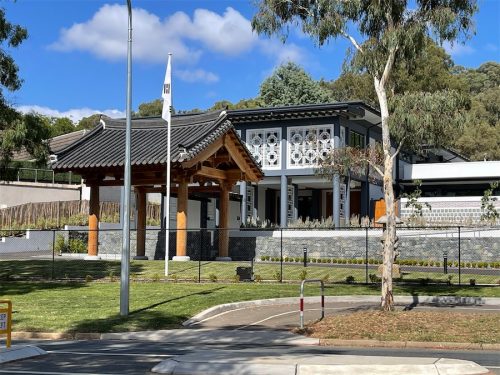 Heart and Seoul of Mugga Way

WHEN the embassy tour buses resume, they can now add Mugga Way to the itinerary. The boulevard of affluence is Canberra’s smug showcase of discrete, large houses peeping above clipped hedges and pampered street lawns.

Then the South Koreans threw in this challenge to the streetscape with its ambassador’s new residence. Its cultural authenticity is beyond debate but for urban context one has to wonder what anyone anywhere along the approval process was thinking.

“While the service was excellent, the noise level was intense and self energising as the echo-reflecting room caused conversation speech level to rise so that verbal communication could only be achieved by shouting,” he writes. He’s right. La Rustica is a personal favourite of mine and here’s the tip, Jack: book a table to the right of the bar as you go in, it’s way better there or outside. Anywhere else doing your head in? Email editor@citynews.com.au

IN declining a lunch invitation, my friend Tom replied to say he’d be interstate with some other retrobates. He meant reprobates, but it got me thinking about what a cool word he might have unwittingly invented. I even worked out a definition: “retrobate” – someone growing old disgracefully. While there was nothing in the three dictionaries and style book on my desk, the online “Urban Dictionary” has claimed it: “Retrobate – one who can’t or who refuses to walk the bleeding edge of technology, preferring old, reliable tools.” To wit, a Luddite.

Helen Musa - May 18, 2021
0
“Dog Tales” is a new exhibition at UC of original artworks from children’s books, writes arts editor HELEN MUSA in her arts round-up.