Backyard motor mechanics, flashy Ferris wheels, hot weather for "Canberra Times" readers (but not us) and the dining phenomena that is blindfolded eating. Who can resist another "Seven Days" with IAN MEIKLE?

“AS a former motor mechanic and car enthusiast, I have a vested interest in ensuring that work carried out on motor vehicles in Canberra is undertaken in a safe and professional manner by appropriately licensed mechanics,” crowed the then (and now) Workplace Safety Minister Mick Gentleman.

It was 2016 and, as part of the ACT government’s Pop Up Cabinet (remember them?), Mick had been meeting with Tuggeranong Valley motor-vehicle repairers on the issue of unlicensed and illegal backyard mechanics.

“As a result of industry concerns, I’ve asked Access Canberra to undertake a targeted compliance program to detect motor vehicle repairers operating illegally in the ACT. This program will commence in May, 2016."

Except it pretty well didn't, according to reader Ralph Murphy.

"Under Minister Gentleman’s watch, virtually nothing has been done, in fact the problem has gotten far, far worse," he says.

Ralph's kicking Mick's shins because after his son bought a house in 2015, a mechanic moved in next door and began operating an unlicensed vehicle repair business at all hours.

"It was progressively getting worse, causing nuisance with noise and pollution and traffic issues like loading and unloading tow trucks in the street, vehicles in various states of repair parked in the front yard and on the street," says Ralph.

"For two and a half years my son tried to get him to tone it down, but to no avail, so he had no alternative but to formally complain to Access Canberra. Access Canberra came out, took no punitive action and issued the operator with a licence!

"My son and I have been repeatedly complaining and supplying evidence to Access Canberra since early 2018 only to be repeatedly fobbed-off."

FORMER chief minister Jon Stanhope says that, along with the majority of Canberrans, he's been perplexed by the ACT government’s obsession with the West Basin development.

"That is no longer the case," our intrepid roving reporter (and columnist), filing from Darwin, says.

"I have been seduced by the beauty of the rainbow Ferris wheel adorning the Darwin foreshore and am certain it has generated such envy within the ACT government that West Basin is being prepared to support a Ferris wheel of such grandeur as to put those presumptuous Darwinians in their place. Mystery solved!" 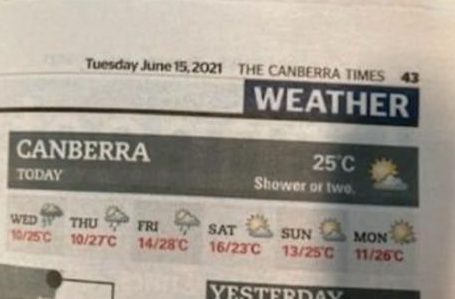 THE parallel universe that is "The Canberra Times" has hit on a circulation booster for its seriously dwindling print product. They're offering warmer weather. On Tuesday last week "Times" subscribers were treated to the printed promise of a shower or two and a maximum of 25C followed by a week in the mid-to-high twenties. "CityNews" readers struggled through the day with a wintery top of 14.5C.

INTENSE eye contact can stimulate sexual arousal, according to one source (randomly cut and pasted from the internet). It says intense or prolonged eye contact helps people feel seen and can make them feel confident and even, ahem, aroused.

Which suggests to me that anyone on a promise might want to think carefully about taking their squeeze to Pialligo Estate's concept culinary experience "Pitch Black", where diners sit in the dark, blindfolded for 90 minutes.

"With external distractions removed, the focus is instead on taste, smell, mouthfeel and sound, as well as promoting the art of conversation," the Pialligo pitch promises. It's a global phenomenon, they say.

The set two-course, $90-a-head, event has been selling out each time since March with another planned for July 1.

HARRIET Elvin, the long-time outgoing CEO of the Cultural Facilities Corporation and new Member of the Order of Australia, has been a safe pair of administrative hands. Nine ministers, five chairs and not a scandal, budget overrun or controversy to show for her 24 years at the helm. She told friends she knew it was time to go when she started hiring people who weren't born when she first took the job!

CALL out to the observant waitress in Emperor's Court Chinese restaurant in Yarralumla. In pops an infrequent but regular customer who hadn't been there since Mother's Day to be greeted with an "are-these-yours?" pair of reading glasses. She'd unwittingly left them behind on May 9.

Ian Meikle is the editor of “CityNews” and can be heard on the “CityNews Sunday Roast” news and interview program, 2CC, 9am-noon.