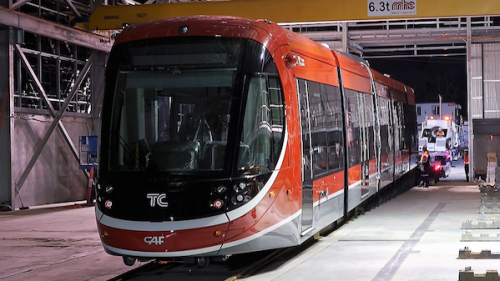 A TRANSPORT proposal to ease traffic congestion on the roads around the capital would call on the ACT government to approach large employers – including the federal government – to stagger work times to increase the use of light rail.

The progressive idea comes after the government has discovered new startling figures that suggests motorists are on the rise in their return to work since the peak of the pandemic.

Minister for Transport and City Services Chris Steel spoke at a public transport forum on Thursday night (April 29) to hear feedback about a new plan to boost patronage on light rail and buses during off peak times.

The government is determined to change commuting habits that includes altering its light rail ticketing model to encourage workers to ditch the car, just days after announcing the next phase in the extension of the rail network southbound.

“We will review fares, increase services and I think it’s part of attracting people on to public transport at different times so we can spread the peak, spread the number of people using public transport, so it’s not crowded in as much,” Mr Steel said on ABC Canberra.

“We also do need to look at the management on our roads, and that does mean having a conversation with employers, large employers, including the federal government, about how we can spread the load on our road network.”

A change in travel habits in line with government public health advice had a number of employees stay home last year before driving to work to maintain social distancing.

Figures have found that motorists on the road has jumped by 21 per cent than what it was before pandemic restrictions affected the workforce.

“So if you thought traffic was bad at the start of this year, you’re right – it’s much worse than it was prior to the pandemic, up eight per cent in Woden too,” Mr Steel said.

“Public transport is a key congestion busting tool and that’s why it is going to be critical going forward.”

The key government points to increase public transport use include:

The Labor-Greens coalition government has not tried to hide that one of the key objectives is to lower carbon emissions.

As Canberra’s population surges towards 450,000 – it was just 322,000 in 2006 – and one in six Canberrans do not feel comfortable riding public transport, according to recent ABS figures, the ACT government could fall behind on their emissions reductions’ commitments.

The government has released a COVID-19 Transport Recovery Plan that has been guided by its own public health advice to ease the burden.

Mr Steel believed greater flexibility in the work day would benefit employers and workers, and it should be embraced quickly.

“It doesn’t help anyone if people are trapped in traffic for 40 minutes to an hour, if they can come in half an hour later and have a much quicker trip in,” he said, “hopefully on public transport, but also potentially by car and that will be a much better outcome for the city.”