The community was walloped with a harsh increase in electricity prices just in time for the cold months of winter, while P-platers were basking in a 79-cents-a-week incentive to drive carefully. Seriously. It's "Seven Days" with IAN MEIKLE.

AT the very minute, the very minute, the Independent Competition and Regulatory Commission gave the thumbs up to a daunting 12 per cent rise in electricity prices, the government made an instant offer to help people scratching to find the extra $3.76 a week needed to stay warm from July 1.

And why the sudden benevolence? Because it was the ACT government’s large-scale feed-in tariff scheme (part of its 100 per cent renewable energy target) that's inflicted 13.13 per cent to the price increase.

Network costs added 2.70 per cent, but falling wholesale energy prices took 4.72 per cent off the price jump. Without the government impost, the price of electricity might have fallen by a couple of per cent.

So little wonder Chief Minister Andrew Barr (annual salary around $350,000) and Energy Minister Shane Rattenbury ($280,000) were rushing to "help soften the upcoming blow to lower-income households" by increasing and widened eligibility of the annual $750 utilities concession and tipping a lazy million (over four years) into the Utilities Hardship Fund.

Small business was slugged an estimated $14.45 a week, another $750 to the annual overheads.

And for the rest of us? “I encourage consumers to contact their retailer and ask if they have a better offer that could save them money," said senior commissioner Joe Dimasi. That should fix it. Thanks, Joe.

Reader Phil commented to citynews.com.au: "What a rort, a 12 per cent rise in a year versus my pay rise of 1 per cent! And the ACT government just says we can buy our own solar system to mitigate these costs? Do they think everyone has a spare few thousand to buy a solar system?"

And coming soon, the rising rates…

IN his quieter moments, does Chris Steel really, honestly, sincerely believe that a $41 discount on a second-stage provisional driving licence makes a scrap of difference to the driving habits of P-platers?

Spinning the move as a "big licence-fee discount" for provisional drivers who "do the right thing", the Transport Minister revealed that P-platers were involved in more than 10 per cent of crashes despite their being just 5 per cent of licensed drivers.

That's certainly the problem, but $41 to not get demerit points, traffic infringement notices or court-imposed traffic penalties (ie obeying the law) is nowhere near the answer. 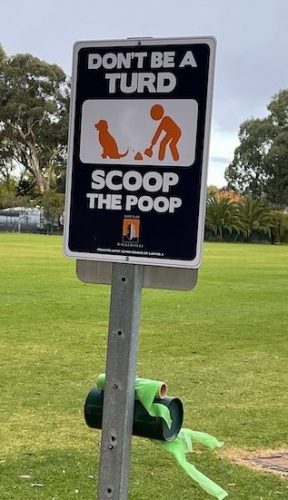 HERE'S a municipal sign I spotted in Adelaide that, well, tells it like it is. At least the Walkerville council gives dog owners bags to contain the problem.

Meanwhile, in response to a reader's polite enquiry to the ACT bureaucracy, came the news that after months of logging and closure, the "ACT government has committed to opening the Yarralumla Dog Park by June 30", save for a shade sail (because they took down the trees) that will be fitted during July.

AN inner-north snout has written grateful to the ACT planning directorate for so clearly illustrating why local residents are upset at the impending loss of a large area of community and recreational open space next to the Kippax shopping centre in Holt.

Trouble was the illustration is in its paid newspaper advertisement seeking tenders for the redevelopment of the playing fields for retail expansion and housing.

"This is why residents elsewhere should be very alert to the ready handover of public suburban land banks to intensive commercial and residential development, when little or no priority is given to simultaneously meeting broader public amenity needs that arise when planning policies increase the population of a suburb,” she lamented.

IN a swanky Campbell housing tower, the gardening club president had the idea of applying for bulbs and plants as part of the continuing share-the-love Floriade Reimagined program. The club, which numbers 40 residents, thought it a great idea so off went the application. And back came approval: 2400 bulbs and 2400 plants. But when it came to planting 4800 specimens the call for garden club volunteers drew out 15 people including the president's family and friends to get the lot into the street soil around the building and into some display wheelbarrows. Come spring, he'll enjoy some smug satisfaction.