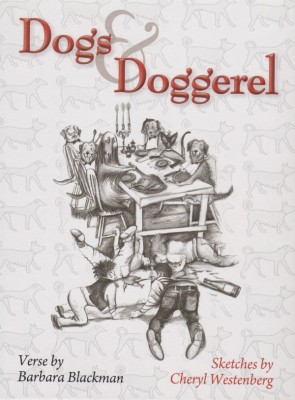 IT was a happy day at the Yarralumla home of author and arts patron Barbara Blackman on Sunday as members of the arts and music community gathered to see the launch of her new book of witty verses about her favourite animal, illustrated by her friend Cheryl Westenberg from Berry, NSW.

The book, “Dog and Doggerel” satirises everything from the enterprises of our neighbour’s Jack Russell terrier to the old song “How Much is that Doggie in the Window”, which all present were required to sing.

Old friends from the visual arts community included the painter Roy Churcher and his wife the former National Gallery director Betty Churcher, who has known Blackman since their youthful days in Brisbane.

Jeff Brownrigg from the University of Canberra read poems, while Adrian Keenan  from the ANU School of Music led the community’s singing.

On the previous evening, he told those assembled, Australian Chamber Orchestra director Richard Tognetti had drawn attention to the presence of Blackman, a generous patron of the orchestra at a concert in Llewellyn Hall.

Blackman explained that some publishers had told her the poems were “old-fashioned”, so her way of retaliating was to serve everybody champagne, fruitcake and shortbread.

“Dogs and Doggerel,” published by Halstead Press, is available at all good bookstores. RRP: $29.95

CityNews - April 7, 2020
0
WITH no Royal Easter Show tea room to organise and bake for this year, the Country Women's Association of NSW and the ACT have taken their fundraising efforts and baked treats online.