IN 1932, Ernst Lubitsch made “Broken Lullaby” which, while at its surface a weepie about a love shattered by war, was “a stirring metaphorical introspection into the militaristic bravado that inspired so many young Germans to march, and caused so many to die.” 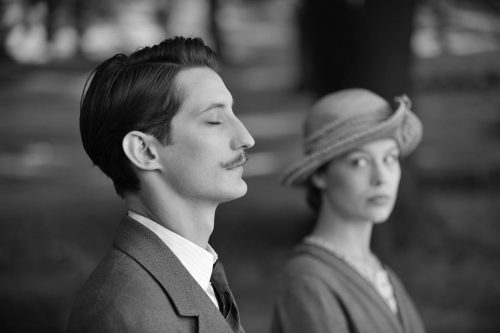 That quote from the IMDb receives a fair reflection in Francois Ozon’s film that pulls no punches in telling how Adrien (Pierre Niney) travels to Germany after World War I to lay flowers on the grave of Frantsz, who did not come home.  Adrien tells Dr and Frau Hoffmeister how before the war in Paris the pair shared interests in art and music. And he meets Frantsz’s fiancée Anna (Paula Beer).

Will Adrien and Anna fall in love? Perhaps. But Adrien has a weightier memory that he needs to quench. He’s not telling the whole story to the Hoffmeisters and Anna. And it’s causing him emotional pain.

I won’t summarise the events and behaviours permeating this lovely film. Keen film-goers won’t find it hard, even before the film tells them, to work out what its apparent issue is. Think about it. Overlay that with Anna’s devotion to the elderly German couple who welcomed her into their household as their only son’s choice of bride before he went to a war from which he didn’t return. What emerges is a quite different dramatic substance.

The eight decades since Lubitsch filmed a play by Maurice Rostand have wrought enormous developments in how cinema tells stories. Ozon’s direction of “Frantsz” (2016) is agreeably modern in its treatment of themes as old as time and love and truth.  Yet throughout its lustrous black and white cinematography (becoming coloured at moments of special significance) it evokes a delightful aura of the cinema of its period. Cinema as comfort food for the spirit.

CityNews - January 16, 2020
0
OPERATION of the iconic and recently refurbished Captain Cook Memorial Jet on Lake Burley Griffin has been will suspended until further notice says the NCA.