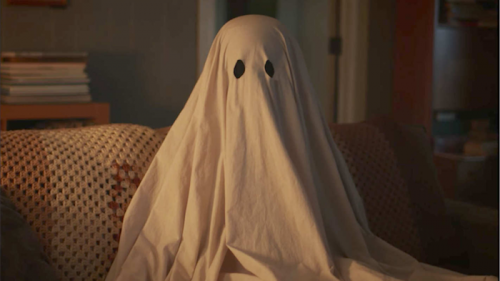 FILMMAKER David Lowery’s film rather defies the conventions of the ghost genre. It spends a lot of time doing nothing, saying nothing. When it does resort to spoken words, they are few in number except for a mid-film homily about the intransigence of life, the deniability of religion and the ability of mankind to do itself great harm for unconvincing reasons.

Casey Affleck and Rooney Mara play C and M, about to move from an outer-suburban bungalow to a metropolitan apartment. But C dies in a car accident. After M farewells him as he lies on the mortuary slab, she covers his head with the sheet.

C’s ghost is in no hurry to get moving. It would be a mistake for a film audience to laugh at Lowery’s selection from the cinematic conventions available to guide directors in displaying a ghost’s departure from the body. But it is visually amusing.

The ghost returns to the house. M moves out. New owners arrive. In time, M’s ghost appears but the two shroud-covered ectoplasms remain forever apart. The film observes the wanderings of C. In a future era, C observes urban sprawl on the site of the now demolished house and building a high-rise office block, jumping from the roof of which he tries unsuccessfully to end his grief and loneliness. The location reverts to the arrival of the first settlers to establish a homestead that native Americans shortly wipe out and finally to C and M living in the original building. In a ghost story, such shifts of time and place are feasible.

The film’s reported budget was $US100,000. After seeing it in an otherwise empty cinema, I came away feeling it had challenged my emotions at a level that fulfilled Lowery’s intentions quite effectively.