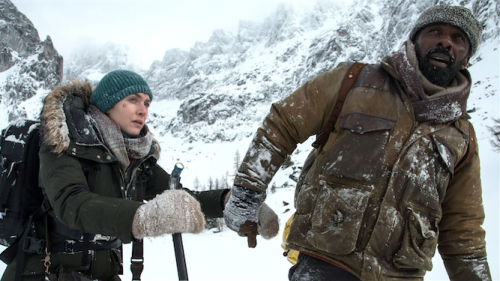 I SUSPECT that reading the first of Charles Martin’s 12 novels to be filmed will generate a more credible impression than does Israeli director Hany Abu-Assad’s film. And as I’ve not read it, that observation reserves judgement on J Mills Goodloe’s screenplay.

The plot is as old as talking movies, perhaps older. Two people, necessarily of different sexes, find themselves confronting an unexpected crisis. Weather is causing cancellation of flights, leaving freelance news snapper Alex (Kate Winslet) desperate to get to her wedding. Neurosurgeon Ben (Idris Elba) has a patient awaiting his arrival to perform life-saving surgery. Ben overhears Alex hearing that bush-pilot Walter (Beau Bridges) might be able to take her. Alex agrees to share the flight with Ben. And it’s up and away for adventure, tribulation, danger, snow-covered mountains and suspense.

Because in flight, an unwellness conniption renders Walter unfit to fly. And that, for some unfathomable reason, leads the tail section to fall off the aircraft and the forward section to come to rest halfway up (or down – you choose) a snow-covered peak, carrying Alex, Ben and Walter’s dog alive

By the time the trio get to safety, they have endured privations that they always discover ways to relieve.

Well before the film reaches the point where the most cynical filmgoer can see exactly where the plot’s trying to reach, the cynics will have worked it out. The only remaining question is, how to get there?

In a sequence of incredible cliché, getting there waits too long to begin and, having begun, takes too long to roll the closing credits.