I AM concerned at the apparent complacency shown by our Emergency Services bureaucracy to the dangers of vehicles being stolen and then set alight in remote parking areas such as Paddys River, Point Hut Crossing, Kambah Pool and the like.

Apart from the drivers of stolen vehicles being potential murderers when they try to outrun the police, they have the potential to ignite major bushfires as we saw only too recently.

As someone who lost a home in the 2003 fires, and acted as an advocate for many others who also lost homes, it amazes me that the government has not put cameras on the single roads leading to such reserves.

After all, the perpetrators have to be picked up after torching the stolen car and, from my regular visits to numbers of these reserves for bushwalking and kayaking purposes, it is not uncommon to see burnt out vehicles in the parking areas. With summer upon us, it is time the government got serious about this issue.

The power of reading

READING the article about Judith Shackley helping children learn how to

read through the School Volunteer Program ACT (CN, November 8) reminded me of how my daughter used to volunteer to help children learn how to read at her sons’ school, taking her three-year-old daughter with her.

One day, my daughter started reading to her daughter who said: “I can read that.”

My granddaughter was bright and today she is a physician but, as a

former teacher, I know that some children struggle, simply because they

don’t have the ability. It isn’t their fault.

It is vitally important that children born without a lot of ability learn to read and SVPACT volunteers are doing a great job. 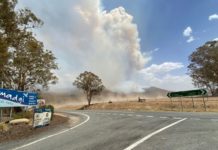 CityNews - January 19, 2021
0
From 3pm today (January 19), the Northern Beaches will be removed from the list of COVID-19 affected government areas exempt from coming into the ACT.