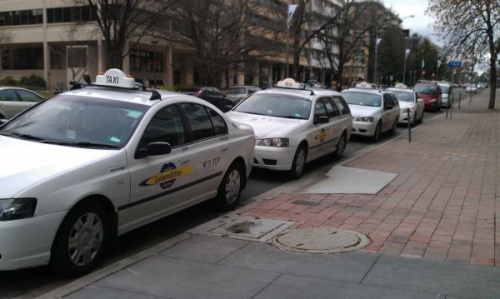 UNHAPPY Canberra taxi plate owners and drivers rallied outside of the Legislative Assembly today (February 19), where they demanded $76,000,000 from the ACT government.

Chairman of ACT Taxi Plate Owners Association (ACTTPOA) Petar Ivanovski says ACT and interstate families have lost their life savings due to the ACT government flooding the market with new taxi licences at a fraction of the price that they paid.

“The government has used manipulative tactics to dominate and monopolise the ACT taxi industry, and this has been to the detriment of innocent members of their own community,” he says.

He says the ACT government plans to issue another 30 plates in March, bringing the total number of plates issued at 80 plates in six months, which is a 20 per cent addition in six months.

“They should be leasing at $20,000.00pa to allow an equitable valuation in the private market that they created,” Mr Ivanovski says.

“If the ACT government wants to deregulate the market and manipulate prices down that is fine, but they must compensate private plate owners that were conned into believing this was a managed ACT government market.

“Plate owners have demanded to be compensated and today issued a $76,000,000 invoice to the ACT government.”

“The government has broken faith with ACT taxi plate owners who are now looking for justice and a fair go,” Mr Coe says.

Paul Dorin - May 24, 2020
0
Cartoonist PAUL DORIN has a playful look at heading back to school.