The 12-year-old waterwise garden will be open for the first time as part of Open Gardens Canberra on the weekend of March 14-15.

“It looks very different to when we moved in. We pulled out the cotoneaster, privet and lawn and designed a garden that would provide seasonally, and cope with extreme heat and lower rainfall,” she says.

All cuttings and green waste go back into the soil, whether through the worm farm or as mulch.

“This does cause little unplanned seedlings to emerge, so we keep some and pot up others,” Michele says.

“Our aim is to feed the soil, repurposing waste into something of higher value.”

Abundant shade protects the front garden thanks to an eight-year-old thriving white cedar, though Michele says they’d like more shade.

“Our water tanks ran dry in November, which has never happened before, so we’ve been saving every scrap of household water to use in the garden,” she says.

“We had a few casualties but overall it did pretty well.”

The garden has a natural look with formal touches such as clipped evergreens and espaliered fruit trees, and red-brick paths wind around the 1924-built house. Sculptures add interest, some made by the couple’s son.

“I wanted a functional garden, but with form, too,” Michele says.

“I’ve tried to create ‘rooms’, with the formal front space, the nook outside the kitchen which I see when I’m cooking, the ‘closed-in’ alley at the side of the house, and the veggies and chickens’ space.

“There have been experiments, and I’m always moving plants with varying success.”

The garden also has an art studio and a large heritage corner shed shared with neighbours.

“I love stepping outside, coffee in hand, poking around and pulling a few weeds,” says Michele.

“Gardening is physical, too, it can be a workout and you get into a different mindset. It’s a break. I like nurturing and caring for the garden, watching things grow, listening to the birds and insects.”

There will be plants for sale on the open weekend, propagated by Michele.

“Our aim is to feed the soil, repurposing waste into something of higher value,” says garden owner Michele England. 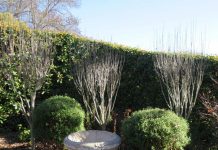 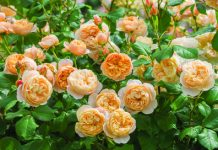